A Sudanese woman who was sentenced to death for converting from Islam to Christianity and then detained after her conviction was quashed has arrived in the United States.

Meriam Yahia Ibrahim was greeted by a crowd of people from the local Sudanese immigrant community when she arrived in Manchester, New Hampshire.

The 27-year-old has relatives in the area.

Since leaving Sudan after her sentence and detention triggered international outrage, Ms Ibrahim had been in Rome, where she and her family met Pope Francis.

"I can't describe the feeling," said her husband, Daniel Wani, who travelled with Ms Ibrahim and their two children from Rome.

"We are so tired," Mr Wani told reporters at Manchester airport. "The ordeal is over."

Ms Ibrahim smiled and waved to the crowd of about three dozen supporters, but she did not speak publicly.

She first touched down in the US at Philadelphia International Airport, where she briefly met the city's mayor.

"It's very clear she is a tremendously strong woman," Mayor Michael Nutter told reporters after greeting Ms Ibrahim and giving her family a toy version of the Liberty Bell, one of the city's historic artefacts.

"Ibrahim is a world freedom fighter," he said.

Ms Ibrahim was sentenced to death in May on charges of converting from Islam to Christianity and marrying a Christian South Sudanese-American.

Her conviction was quashed in June, but Sudan's government accused her of trying to leave the country with falsified papers, preventing her departure for the US.

Renouncing the Islamic faith is punishable by death under the interpretation of Islamic law in many countries. 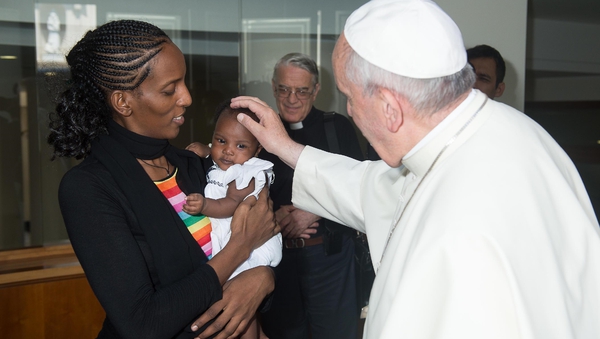