Liberia has announced the quarantine of a number of communities and the closure of schools across the country, in a bid to halt the worst Ebola outbreak on record.

Security forces in Liberia were ordered to enforce the measures, part of an action plan that included placing all non-essential government workers on 30-day compulsory leave.

As of 23 July, 672 deaths have been blamed on Ebola in Liberia, neighbouring Guinea and Sierra Leone, according to World Health Organisation figures.

The WHO says this is the largest recorded outbreak in terms of cases, deaths and geographical coverage.

"This is a major public health emergency. It is fierce, deadly and many of our countrymen are dying and we need to act to stop the spread," Lewis Brown, Liberia's information minister, said.

"We need the support of the international community now more than ever. We desperately need all the help we can get."

The European Union has allocated an extra €2 million to fight the Ebola outbreak spiralling out of control in West Africa, bringing total EU funding to €3.9m.

"The level of contamination on the ground is extremely worrying and we need to scale up our action before many more lives are lost," said the EU's Humanitarian Aid Commissioner Kristalina Georgieva.

The EU has deployed experts on the ground to help victims and try to prevent contagion.

Ms Georgieva called for a "sustained effort from the international community to help West Africa deal with this menace".

Hong Kong said it was quarantining all people from Guinea, Sierra Leone and Liberia who were showing Ebola-like symptoms on arrival in the city.

The EU said the risk of the virus spreading to Europe was currently low, since most cases are in remote areas in the affected countries and those who are ill or in contact with the disease are encouraged to remain isolated.

However, there has also been particular concern after Nigeria reported what is thought to be its first death from the disease on Friday.

American Patrick Sawyer, 40, developed symptoms on board a flight from Liberia to Nigeria.

Mr Sawyer, who was of Liberian descent, had been on his way home to the US. His sister has also died of the disease.

Mr Sawyer is said to have made multiple flights from Liberia to Nigeria. The disease can have a fatality rate of up to 90%, and there is no treatment or vaccine.

Health workers tackling the outbreak in the region have been especially vulnerable to contracting the disease.

Dr Sheik Humarr Khan, who had been hailed as a national hero for his work treating patients with Ebola in Sierra Leone, died yesterday after being quarantined in hospital in the country.

Two US health workers - a doctor and a missionary - are also in hospital in neighbouring Liberia after contracting the disease, prompting two US missionary groups to evacuate non-essential personnel from the country.

Health officials in the UK have been ordered to be on the lookout for the virus as the government's emergencies committee met to discuss the "serious threat" emerging from the outbreak.

British Foreign Secretary Philip Hammond said it was "most unlikely" that Ebola could spread within the UK because of "frankly different" standards of infection control in his country.

He also said the "logical" approach was to tackle the disease at source in West Africa.

Two people have been assessed for the virus in Britain.

A man was checked over in Birmingham but tests for the deadly virus proved negative, a Department of Health spokeswoman said.

Reports suggest the man was tested earlier this week after he travelled from Benin in Nigeria via Paris.

Meanwhile, another man visited a separate UK hospital over fears he had the virus.

The man, who attended Charing Cross Hospital in west London, was assessed but doctors ruled out the need for an Ebola test, the spokeswoman added. 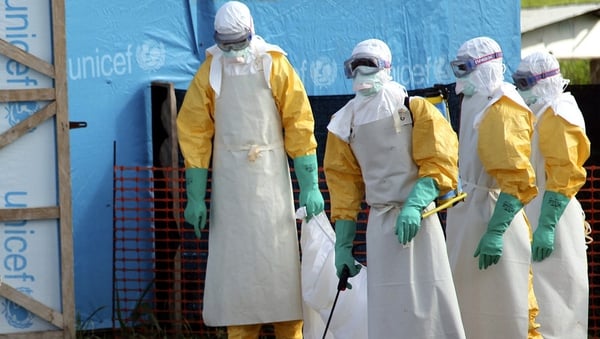