"There were human remains that had not been picked up," said Michael Bociurkiw, a spokesman for the Organisation for Security and Cooperation in Europe (OSCE) observer mission after visiting the scene, amid reports of the wreckage being rearranged.

"What struck us is that we did not monitor any recovery activity in place," he said, pointing out that OSCE observers saw human remains in at least two areas at the sprawling crash site in rebel-held territory.

Pro-Russian insurgents said yesterday they had released the bodies of 282 victims after they were sent by refrigerated train to the government-controlled town of Kharkiv, 300 kilometres to the northwest.

But Dutch experts now in possession of the corpses said they had only counted 200 on the morgue train.

"We are sure of having 200 bodies and body parts, that is all that I know," said Jan Tuinder, the head of the Dutch delegation told journalists.

Flight MH17 was apparently brought down by a missile on Thursday with 298 people on board, including 193 Dutch citizens.

Five days after the incident, OSCE monitors said they noticed "changes" in the arrangement of the wreckage.

Western leaders have complained that rebels have been tampering with vital evidence at the site.

But Mr Bociurkiw said there should be no "rush to conclusions" and the changes "could have been part of the effort to recover remains".

Fifteen monitors from the European security body visited the site for a fifth day today, accompanied for the first time by a senior official from Malaysia Airlines and by two Malaysian civil aviation experts.

"There was no security perimeter. We also noticed that the vast amount of personal belongings of passengers has been removed from the scene," he added.

"The Malaysian experts observed that the heat from the impact was so intense that it melted the wings," which were made of aluminium, he said. 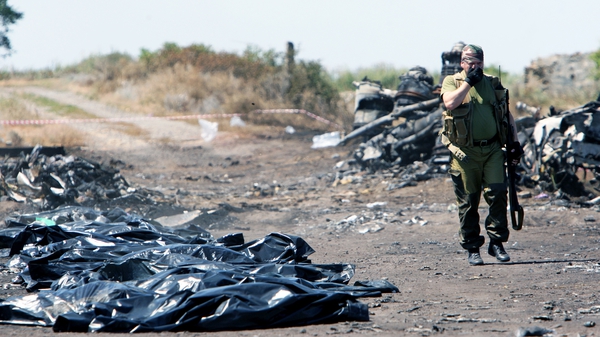