Pro-Russian separatists in eastern Ukraine have handed over two black boxes recovered from the crash site of the MH17 jet to Malaysian officials.

They also announced at a press conference a ceasefire within a 10km radius around the crash site to allow international investigators to safely access the vast area where the Malaysia Airlines flight was downed.

The United Nations Security Council earlier condemned the downing of Malaysia Airlines Flight MH17, which had 298 people on board.

It demanded that armed groups allow "safe, secure, full and unrestricted access" to the crash site.

The 15-member council unanimously adopted an Australian-drafted resolution demanding those responsible "be held to account and that all states cooperate fully with efforts to establish accountability".

"We owe it to the victims and their families to determine what happened and who was responsible," said Australian Foreign Minister Julie Bishop.

She travelled to New York to negotiate the UN resolution.

Australia lost 28 citizens in the crash.

The United States and its allies have blamed pro-Russian rebels for downing the plane.

Ms Bishop told the council that Russia "must use its influence over the separatists" to ensure access to the site.

Veto-wielding council member Russia voted for the resolution after some changes were made to the text, including the characterisation of the incident as the "downing" of the airliner instead of "shooting down".

A request by Russia for references to armed groups to be removed was not granted.

The resolution "demands that the armed groups in control of the crash site and the surrounding area refrain from any actions that may compromise the integrity of the crash site, including by refraining from destroying, moving, or disturbing wreckage, equipment, debris, personal belongings, or remains". 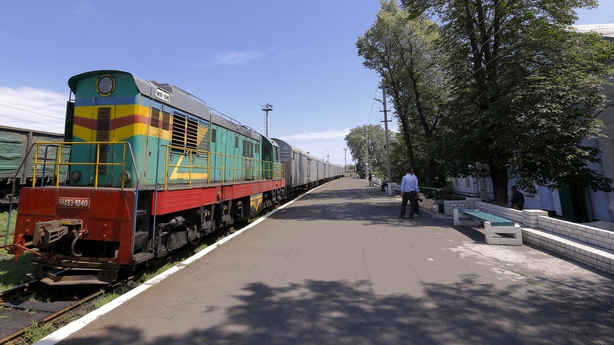 A train carrying the remains of most of the victims of the plane left the site this evening and will be handed over to authorities in the Netherlands, after the Malaysian Prime Minister reached a deal with the leader of pro-Russian separatists controlling the area.

Almost 200 of the victims on the flight to Kuala Lumpur from Amsterdam were Dutch.

An emotional Dutch Foreign Minister Frans Timmermans said it was despicable that human remains were being used in a political game.

"We will not rest until all facts are known and justice is served," Mr Timmermans said.

The resolution "supports efforts to establish a full, thorough and independent international investigation into the incident in accordance with international civil aviation guidelines" and "demands all States and other actors refrain from acts of violence directed against civilian aircraft".

Russian UN Ambassador Vitaly Churkin said Russia was ready to assist an international investigation but warned against "jumping to conclusions" on who was to blame.

Evidence should be given to the United Nations' International Civil Aviation Organisation, he said.

Mr Churkin said Ukraine had questions to answer regarding the actions of its air traffic controllers and why a Ukrainian Bukanti-aircraft missile system "was in an area directly controlled by rebels" and why it was removed just after the downing of the airliner.

Russia's Defence Ministry challenged accusations that pro-Russian separatists were responsible for shooting down the airliner and said Ukrainian war planes had flown close to it. 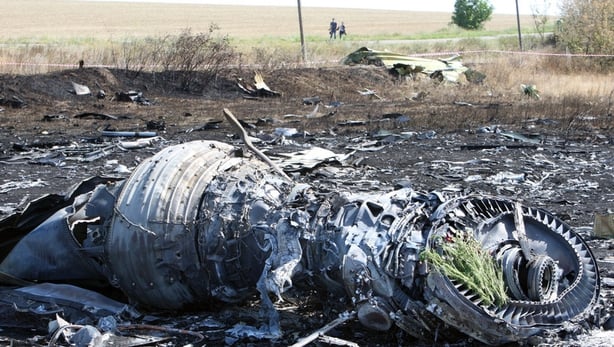 The plane was brought down in east Ukraine last week, killing all 298 people on board. It is believed to have been shot down by a missile.

Mr Poroshenko said Ukrainian planes in the area were on the ground at the time of the crash.

In response to a Russian Defence Ministry statement earlier this evening that a Ukrainian military plane flew within 3-5 km of the Malaysian plane at the time it was downed, Mr Poroshenko told CNN: "My immediate reaction - this is not true."

He said Ukraine was open to any investigation about its planes and that the Russians should provide evidence for such a statement.

Mr Poroshenko also said that at the time of the incident the air space over eastern Ukraine was being monitored by various surveillance systems.

"Everybody knows that in this period of time when the tragedy happened all Ukrainian planes were on the ground [in the area]," he told CNN in an interview.

According to a transcript of the interview posted on his website, Mr Poroshenko also aired the idea of asking the United States to grant Ukraine a special status as a so-called Major Non-NATO Ally.

Israel, Egypt and Australia currently have this status.

US Ambassador to the United Nations Samantha Power told the council there had been too little condemnation from Russia.

"If Russia genuinely believes that Ukraine was involved in the shoot-down of flight 17 surely President [Vladimir] Putin would have told the separatists ... to guard the evidence at all costs," Ms Power said.

When asked what Russia would tell the separatists, Mr Churkin told reporters: "Our message is reflected in the resolution, this is our message."

Separatists' actions at the crash site begs the question what are they trying to hide, he said.

Russia and President Putin have direct responsibility to compel separatists to cooperate with investigation, he said.

The burden is now on Russia to insist that separatists stop tampering with investigation, he added.

Mr Obama said his preference continues to be to find a diplomatic solution in Ukraine, and he still believes that can happen.

He told a news conference: "There is information that the recorders were in their hands all these days and they did certain things to them."

He also said that rebels would give the flight recorders to international aviation authorities.

Three members of the Dutch disaster victim identification team arrived earlier today at the railway station in Torez, near the crash site.

The head of the team inspected the storage of the bodies in the rail cars and, despite an overwhelming smell of decomposition when the doors were opened, said it was fine.

"The storage of the bodies is of good quality," said Peter van Vliet, whose team went through the wagons dressed in surgical masks and rubber gloves.

Call for airline summit after downing of MH17

Dutch prosecutors have opened an investigation into the crash on suspicion of murder, war crimes and intentionally downing an airliner, a spokesman has said.

Based on the Law on International Crimes, the Netherlands can prosecute any individual who committed a war crime against a Dutch citizen.

Of the 298 people who were killed when the plane was downed over Ukraine, 193 were Dutch citizens.

The spokesman said that a Dutch public prosecutor was in Ukraine as part of the investigation.

The Dutch prime minister, meanwhile, threatened tough action against Russia if it did not do more to help.

Western governments have pointed the finger of blame at pro-Russian rebels and at Russia itself over the downing of the plane.

Russia has denied involvement and blamed the Ukrainian military for the disaster.

"It is clear that Russia must use her influence on the separatists to improve the situation on the ground," Prime Minister Mark Rutte told a committee of the Dutch parliament.

"If in the coming days access to the disaster area remains inadequate, then all political, economic and financial options are on the table against those who are directly or indirectly responsible for that," he said.

His comments reflected a change in tone from previous days, when he had stressed the importance of ascertaining the facts of the crash before considering a response.

Mr Rutte promised politicians that "measures would not be lacking" if it was confirmed who was responsible for bringing down the airliner.

His remarks followed days of mounting pressure calling on the government to take a harder line against Russia.

"In the Netherlands we are inclined to approach our opponents in a fair and socially acceptable way in hope that opponents will respond in kind," said Dick Berlijn, a former head of the Dutch armed forces who has been outspoken in calling for a tougher approach.

"What we have seen, especially with the Russian administration is this didn't impact at all, they saw this as a weakness," he said in an interview with Reuters.

A Ukrainian security source has said the Ukrainian government stood by information indicating that pro-Russian separatists had received a BUK-M1 (SA-11) radar-guided missile system from Russia, most likely with a crew.

"The fighters have no special training to operate such complicated military equipment so we are most likely talking about staff crew for the BUK, which came from Russia."

A spokesperson for the Ukrainian security council has also said there is evidence that the missile came from Russia.

In Ireland, a book of condolences for victims of the crash has been opened at City Hall on Dame Street in Dublin, and will be accessible to members of the public until 5pm on Wednesday. 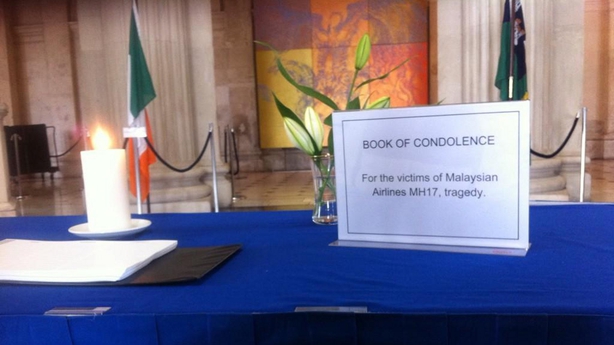 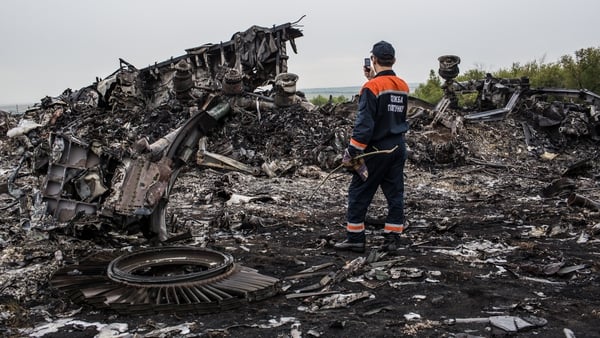 Kerry claims evidence of Russian involvement in downing of MH17