Ukraine has accused Russian army officers of fighting alongside separatists in the east of the country and said Russia was once more building up its troops on the border.

A missile that downed a Ukrainian transport plane carrying eight people near the border was probably fired from Russia, Ukrainian officials said.

President Petro Poroshenko held an emergency meeting of his security chiefs after a weekend of Ukrainian air strikes on rebel positions near the border with Russia.

Russia had claimed the Ukrainian forces had killed a Russian man with a cross-border shell.

The war of words between the two countries and intense fighting, in which Ukrainian forces say they inflicted heavy losses on the rebels, marked a sharp escalation in the three-month conflict in which several hundred Ukrainian servicemen, civilians and rebels have been killed.

"Information has ... been confirmed that Russian staff officers are taking part in military operations against Ukrainian forces," Mr Poroshenko said.

Diplomatic efforts to defuse the crisis have so far made little progress.

However, German Foreign Minister Frank-Walter Steinmeier said a "Contact Group", which includes Russia, Ukraine and the Organisation for Security and Cooperation in Europe, aims to talk to the rebels by video link tomorrow and meet them in person soon afterwards.

Speaking after what he described as "difficult talks" on the telephone with his French, Russian and Ukrainian counterparts, Mr Steinmeier said all parties were making a "strong effort" for the Contact Group to hold the video conference and agree a venue for the direct meeting.

Mr Poroshenko made similar complaints of Russian incursions yesterday to the European Union with an eye to pushing the union to exert greater pressure, and possibly more sanctions, on Russia. 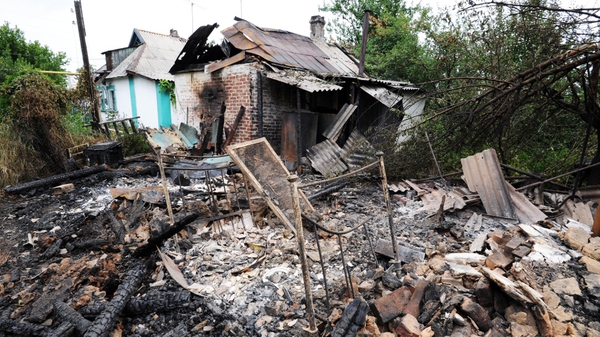