Russia has threatened Ukraine with "irreversible consequences" after a Russian man was killed by a shell fired across the border.

Although both sides have reported cross-border shootings in the past, it appears to be the first time Moscow has reported fatalities on its side of the border.

Kiev called the accusation its forces had fired across the border "total nonsense" and suggested the attack could have been the work of rebels trying to provoke Moscow to intervene on their behalf.

The rebels denied they were responsible.

A report by the government's "anti-terrorist operation" said a convoy of about 100 separatist armoured vehicles and trucks had crossed into Ukraine carrying rebel fighters from Russia.

Combat has intensified dramatically in Ukraine since a rebel missile attack killed dozens of government troops on Friday.

Ukrainian forces said their warplanes carried out five air strikes on rebel bases near Luhansk airport, at Izvarino on the border and against Chechen fighters who it said had occupied a National Guard base at Lysychansk.

Rebels controlling Luhansk, on the border with Russia, said Ukrainian forces had begun to storm the town with about 50 tanks and attack planes.

There was no word of this from the Ukrainian side.

In other incidents, local officials said 18 civilians had been killed in shooting in Luhansk and Donetsk, the region's main city, which is also controlled by separatists.

There were no details of these incidents.

Moscow's response to the cross-border shelling raises again the prospect of Russian intervention, after weeks in which President Vladimir Putin had appeared intent on disengaging, pulling back tens of thousands of troops he had massed at the frontier.

Russia sent Ukraine a note of protest describing the incident as "an aggressive act by the Ukrainian side against sovereign Russian territory and the citizens of the Russian Federation", the Russian Foreign Ministry said in a statement warning of "irreversible consequences".

"This represents a qualitative escalation of the danger to our citizens, now even on our own territory. Of course this naturally cannot pass without a response," Russian Deputy Foreign Minister Grigory Karasin told Rossiya-24 state TV.

Russia's Investigative Committee said a shell had landed in the yard of a house in a small town on the Russian side of the frontier, killing a man and wounding a woman.

The Russian town is called Donetsk, sharing the name of the Ukrainian city of 1 million people that the rebels have declared capital of an independent "people's republic". 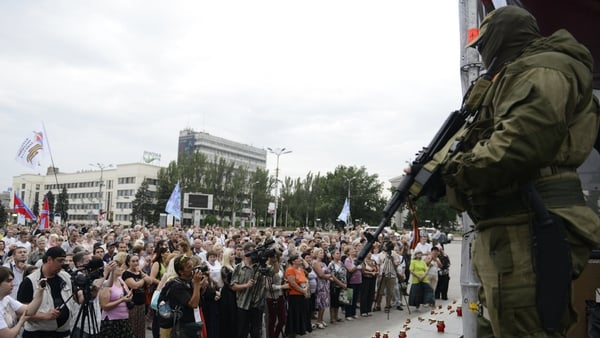