Egypt has proposed a ceasefire in the conflict between Israel and Hamas, which would start at 9am in the morning.

Egypt has also proposed that talks take place aimed at easing the flow of goods into Gaza.

An Israeli official said its security cabinet is to meet in the morning to discuss the proposal.

However, Hamas spokesman Fawzi Barhum said it will not commit to a ceasefire without a full agreement.

"A ceasefire without reaching an agreement is rejected. In times of war, you don't cease fire and then negotiate," he said.

The proposal came ahead of a scheduled visit by US Secretary of State John Kerry to Egypt.

Earlier, the US cautioned against any Israeli ground invasion of Gaza.

It said it would put even more civilians at risk than are currently in the crossfire of attacks on Hamas.

However, the White House stopped short of criticising Israel over the civilian death toll in Gaza since Israel began an offensive, saying the government had a "right" and "responsibility" to defend its citizens against rocket attacks.

UN chief Ban Ki-moon said "too many" Palestinian civilians have been killed.

He urged Israel to scrap plans for a potentially devastating ground offensive and repeated his call for a ceasefire.

"The situation in Gaza, with at least 170 Palestinians killed and no Israeli casualties, appears to be worsening," Mr Ban said.

Palestinian President Mahmoud Abbas said he would ask Mr Ban to "put the state of Palestine under the UN international protection system" in order to address the violence in Gaza.

Emergency services spokesman Ashraf al-Qudra said the strikes killed three people in Rafah in the south of Gaza, including a young child, and two people in Khan Yunis, also in the south.

The Arab League has called on the "international community" to end Israeli air strikes on Gaza and to protect Palestinians.

Israel began Operation Protective Edge before dawn on Tuesday in an attempt to halt cross-border rocket fire by militant groups.

Around 715 rockets have hit Israel, while another 160 were intercepted by the Iron Dome air defence system, the army said.

No Israelis have been killed since the start of the operation.

Meanwhile, the EU has said it is in contact with parties in the Middle East to press for a ceasefire in Gaza.

This morning, the army said it had shot down a drone that had come from Gaza.

An aerial drone from Gaza infiltrated Israel a short time ago. IDF forces shot it down with a Patriot missile above Ashdod.

The Israeli army has also reported a number of rocket attacks from southern Lebanon this evening. It said it responded with a "salvo of shells and flares". 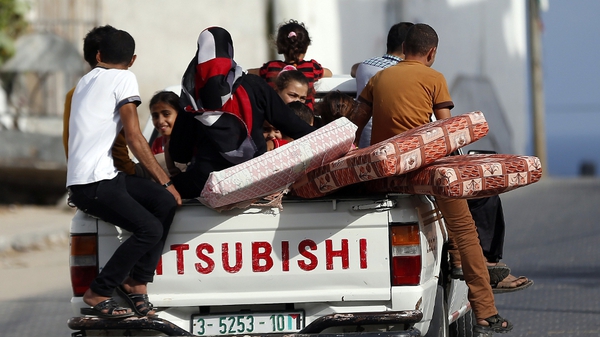