Palestinian president Mahmoud Abbas is to ask the United Nations to put the state of Palestine under "international protection" because of the worsening violence in Gaza.

The PLO said Mr Abbas would present a letter to this effect to the UN Special Coordinator for the Middle East Peace Process, Robert Serry, addressed to the UN Secretary General Ban Ki-moon.

Earlier, the Israeli prime minister, Benjamin Netanyahu, turned down international calls for a ceasefire, and defended his country's offensive in Gaza.

Thousands fled their homes in a Gaza town after Israel warned them to leave ahead of threatened attacks on rocket-launching sites.

This is sixth day of an offensive that Palestinian officials said has killed at least 160 people.

Militants in Islamist-ruled Gaza kept up rockets salvoes deep into the Jewish state and the worst bout of Israel-Palestinian bloodshed in two years.

It showed no signs of abating despite mounting international pressure to cease fire.

A Palestinian woman and a girl, aged 3, were killed in Israeli air strikes early today.

The Gazan health ministry said 18 people were killed when the house of Gaza's police chief was bombed from the air in the single deadliest attack of Israel's offensive.

This was Israel's first reported ground action in Gaza during the current fighting.

The airport has not been hit in the hostilities and flights have been operating normally.

Hamas made good on a threat to send rockets streaking toward Tel Aviv at 9 pm and other areas in heavily populated central Israel.

Hundreds of thousands of Israelis sought shelter as Palestinians in the streets of Gaza City cheered the launchings, the biggest strike yet on the Tel Aviv metropolitan area.

No one has been killed by the more than 800 rockets the Israeli military said has been fired.

Customers in Tel Aviv beachfront cafes shouted their approval as they watched the projectiles being shot out of the sky.

The Gaza Health Ministry said at least 160 Palestinians, including about 135 civilians - among them 30 children, have been killed in the six days of warfare, and more than 1,000 have been wounded.

Israeli leaflets dropped on Beit Lahiya, where 70,000 Palestinians live, said civilians in three of its 10 neighbourhoods were "requested to evacuate their residences" and move south, deeper into the Gaza Strip, by 12pm.

The Gaza Interior Ministry, in a statement on Hamas radio, dismissed the Israeli warnings as "psychological warfare" and instructed those who left their homes to return and others to stay put. 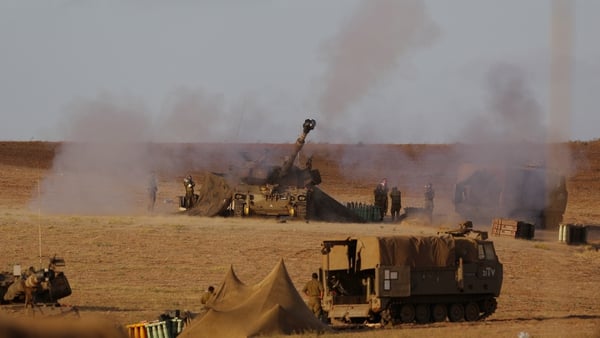