Northern Ireland Secretary Theresa Villiers has praised this year's 12 July parades as the most peaceful in years.

Northern Ireland First Minister Peter Robinson said the campaign for tolerance had been strengthened by the peaceful outcome of the various parades.

Thousands of loyal order members commemorated the victory of Protestant King William of Orange over Catholic King James II at the Battle of the Boyne in 1690.

Orangemen staged a peaceful protest in north Belfast after restrictions were imposed on their procession.

A major but low-key security operation was introduced after last year's violence, when dozens of officers were injured and deployed water cannon and baton rounds to quell rioters.

Bands played music, supporters cheered and sang and demonstrators carried a large protest banner as they were halted a short distance from the nationalist Ardoyne residential area.

Appeals for no trouble were issued by a wide coalition of unionist leaders, including Mr Robinson, as well as nationalists.

Mr Robinson said: "The campaign for tolerance and respect for our culture has been strengthened and will continue."

The Parades Commission, a government-appointed body that adjudicates on marches, decided loyal order members should not be allowed to continue past the contested section of Ardoyne because of tensions with nationalist residents.

At 17 main parades across Northern Ireland, marchers stopped for six minutes - the time it would take to complete the Ardoyne parade - and a statement was read out calling for the commission to be scrapped.

Stormont Justice Minister David Ford said: "This year we have shown how cool heads and careful words helped to keep the situation calm and I would hope that approach continues so we can work towards resolution of all contentious parades."

A spokesman for the Commission said: "The work which takes place at grassroots level by parade and protest organisers and local politicians is challenging but invaluable.

"Reducing tension and instances of public disorder is an encouraging backdrop against which to address outstanding parading issues through sincere, meaningful and sustained dialogue."

With the bill for policing parades and flag disputes in Northern Ireland over the last 20 months standing at around £55 million, there was a significant effort to avoid further trouble this year.

Almost 700 people were charged or reported to prosecutors in Northern Ireland last year in relation to parade and protest-related disorder.

Missiles were thrown from loyalist lines at police, and mass-goers in St Patrick's were trapped for a short period outside the church as loyalist marching bands filed past, most playing a single drum beat after complaints about provocation in previous years.

The PSNI is also investigating claims that a loyalist band broke a determination from the Parades Commission that barred music being played as the parade passed the church.

Sinn Féin president Gerry Adams said the fact that this year's Twelfth commemorations have passed off relatively peacefully will have come as a relief to people across Northern Ireland.

He added: "However there is urgent political work to be done to deal with ongoing difficulties which have bedevilled the political process.

"These include outstanding elements of previous agreements and the need to resolve the issues of flags, parades and dealing with the past." 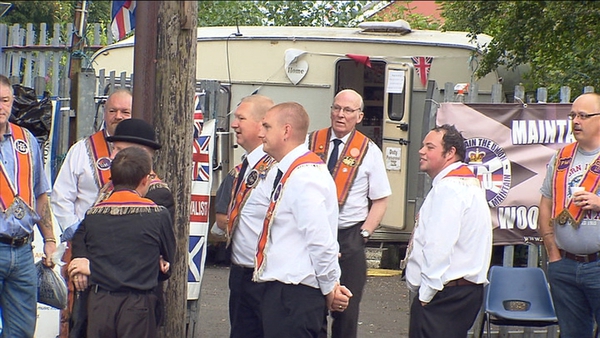