The former Minister for Justice Alan Shatter, has directed another attack at barrister Sean Guerin and alleged that his report did not comply with "constitutional and natural justice".

Mr Shatter has called on the Human Rights and Equality Commission to examine how the Guerin Report was compiled.

Speaking in the Dáil, he said: "In a speech I made in this House some weeks ago that both Government and Opposition have chosen to ignore, I raised the failure to comply with basic fair procedures, constitutional justice and natural justice in the manner in which Mr Sean Guerin BL, did his work in the Guerin Report.

"I want to invite the Human Rights and Equality Commission, who have very prominent members to now have a look, from a human rights perspective of how that matter was dealt with", he said.

After he made his comments Sinn Féin's Pádraig MacLochlainn said if Ceann Comhairle Seán Barrett was in the chamber "he would never tolerate a member of the Opposition using the wrap up of a bill to settle their old scores."

He said it is the minister's job to wrap up a bill and not the former minister.

Mr Shatter said: "You have no interest in human rights at all."

Earlier Mr Shatter paid tribute to all of those who worked on the bill in his former department over the last two years.

Details of a number of technical amendments to the Irish Human Rights and Equality Commission Bill 2014 are being debated in the Dáil, before Minister for Justice Frances Fitzgerald when Mr Shatter made his comments.

The Electoral Amendment No 4 Bill passed all stages in the Dáil and it will be sent to the Seanad before the current debate commenced. 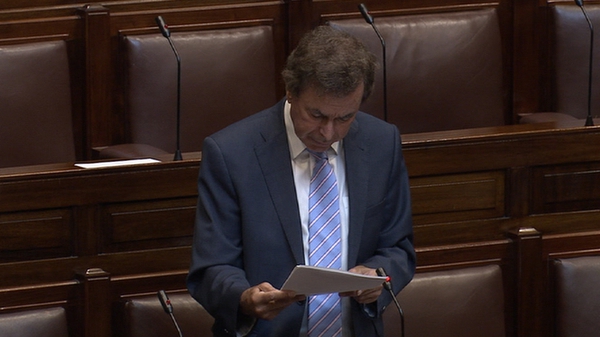