Two pilot whales returned to the sea in Co Donegal yesterday despite expert advice to let them die naturally have beached again.

A total of 13 whales became stranded on a beach in Falcarragh on Monday.

By Tuesday evening, eight of the whales had died, with one more unaccounted for after earlier being returned to the sea.

Gardaí sealed off the beach on Tuesday and the public were asked to stay away.

However, members of the public yesterday returned two whales to the sea.

They have now become stranded again. One is located at a beach on Inis bó Finne, while another whale washed in at Oirthear Dhumhaigh  is a pilot whale also believed to be one of the 13.

Another whale carcass washed ashore at cliffs at Cnoc Fola is not believed to be that of a pilot whale and is reported to have been there for several weeks. 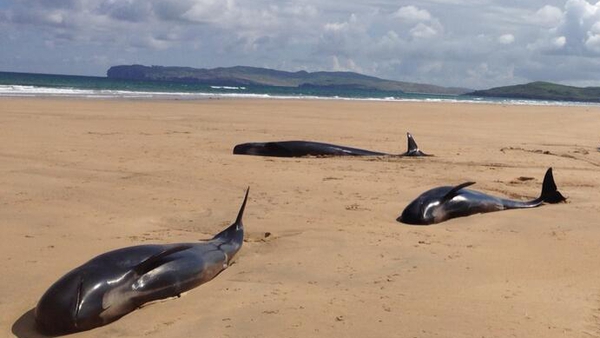 Two whales refloated despite advice to let them die