Minister for Finance Michael Noonan has said he expects a "significant" Cabinet reshuffle and that it would be announced by Wednesday.

His comments came as talks took place between Taoiseach Enda Kenny and Tánaiste Joan Burton over their policy priorities and the Cabinet reshuffle.

The talks have adjourned for the evening and will resume after tomorrow's Cabinet meeting.

A Government spokesperson described the meeting as "good".

Leaving the advisers and party strategists outside, the Taoiseach and Tánaiste began their talks shortly after 10am.

They took a break at 2pm this afternoon, before returning for another session from 4.30pm to 6.20pm.

On their way into Government buildings this morning, Mr Kenny and Ms Burton would not be drawn on the composition of the new Cabinet or the possibility of swapping portfolios.

Ms Burton said the talks would be full and frank, while Mr Kenny noted he had seen ten different Cabinets in the media recently.

Speaking on his arrival at a meeting of eurozone finance ministers in Brussels today, Mr Noonan said that additional social housing may form part of the "re-focused" Programme for Government.

He said: "There are issues that have come to the forefront like additional social housing ... in the last while, and I expect those to be met in the slight change of direction in the Programme for Government.

"On the personnel side, it's a matter for the Taoiseach and the Tánaiste, but it would be reasonably significant.

"There are a number of vacancies we think are emerging both in Labour and Fine Gael."

When asked about the new Irish EU Commissioner, he said: "I think it will be in the context of whatever changes are made in Cabinet. I would expect whoever is nominated will be in that list."

Much speculation about the reshuffle has centred on the Department of Health and whether James Reilly will remain there.

Minister Reilly has said he has "no idea" if a press briefing this afternoon on health insurance was his "last hurrah" in the department.

He said he wants to keep working at what he is doing.

Earlier, Mr Reilly said his "passion" was the health service, but he said the Taoiseach placed people where they can best serve and he respected that.

One of those who could possibly succeed him, Richard Bruton, said he had an ambition to continue building the recovery in the jobs market as Minister for Jobs.

But speaking at the launch of the IDA's annual report for 2013, Mr Bruton added that it is not a decision that he ultimately has to take.

But he added that there is a long way to go. He said the policy underpinning that recovery has to be right and he is very committed to the task in hand. 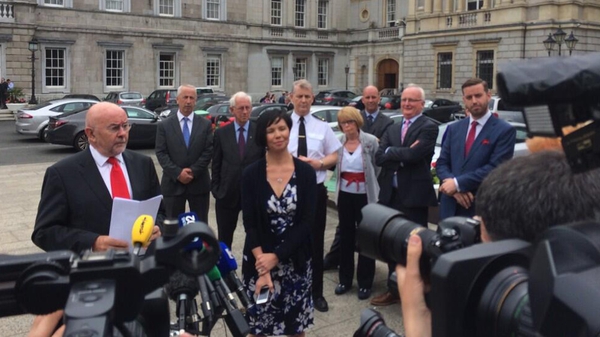