The Palestinian leadership has said it holds Israel responsible for the murder of an East Jerusalem teenager in a suspected revenge attack for the killing of three Israelis.

The body of 16-year-old Muhammad Hussein Abu Khdeir, who was reported kidnapped from the Arab eastern sector of the city before dawn, was found in a forest in west Jerusalem.

Palestinian president Mahmoud Abbas, in a statement, demanded that Israeli Prime Minister Benjamin Netanyahu condemn the murder and punish those who carried it out.

"I demand the Israeli government punish the killers if it wants peace between the Palestinian and Israeli people," Mr Abbas said.

Israel must also "take concrete steps on the ground to stop (revenge) attacks and the chaos caused by the Israeli escalation," he said.

Shortly afterwards, Mr Netanyahu issued a statement condemning the "despicable murder" and urged the authorities to expedite an investigation into the reasons behind it.

"Israel is fully responsible for the killing of the teenager and we demand that the perpetrators are found and held accountable," he said.

Hamas has warned that Israel would pay for the kidnap and murder.

"We send our message to the Zionist entity and its leaders, which hold direct responsibility (for the murder), that our people will not let this crime pass, nor all the killings and destruction by your settlers," the Islamist movement said.

"You will pay the price for these crimes."

The United States has condemned the killing, warning that acts of vengeance would worsen an explosive situation.

"There are no words to convey adequately our condolences to the Palestinian people," US Secretary of State John Kerry said in a statement.

The violence has triggered a wave of rioting in the East Jerusalem neighbourhood of Shuafat, with hundreds of masked Palestinians hurling stones at Israeli police in riot gear.

Mr Netanyahu also "called on all sides not to take the law into their own hands" as fears grew that the killing was an act of revenge for the murder by suspected Palestinian militants of three Israeli teenagers, whose bodies were found on Monday.

The family of one of those three Israelis condemned the kidnap and killing the Palestinian youth.

"There is no difference between Arab blood and Jewish blood. Murder is murder. There is no forgiveness or justification for any murder," said the family of Naftali Frenkel, 16, who was kidnapped and killed in the southern West Bank in June.

"If the Arab youth was murdered because of nationalistic motives then this is a horrible and horrendous act," a statement added.

Frenkel's body was found Monday alongside those of Eyal Yifrach, 19, and Gilad Shaer, 16, who disappeared together from a hitchhiking spot near the city of Hebron.

A joint funeral was held for the three in Modi'in yesterday.

Tens of thousands of mourners joined in an outpouring of national grief.

Dozens of Israelis had protested in Jerusalem last night against the murders, shouting "death to the Arabs" at one of the demonstrations.

Tensions were also high in the West Bank, where around 40 Palestinians were arrested in raids yesterday.

Four people were wounded by live bullets early this morning in an Israeli raid in the Palestinian city of Jenin.

Reviving a punitive policy suspended in 2005 as a Palestinian uprising waned, Israeli forces destroyed the home of a Palestinian arrested this month on charges of shooting dead an off-duty police officer in the West Bank in April.

Israel says demolishing the homes of Palestinians involved in attacks on Israelis has a deterrent effect. Rights groups have condemned the practice as collective punishment. 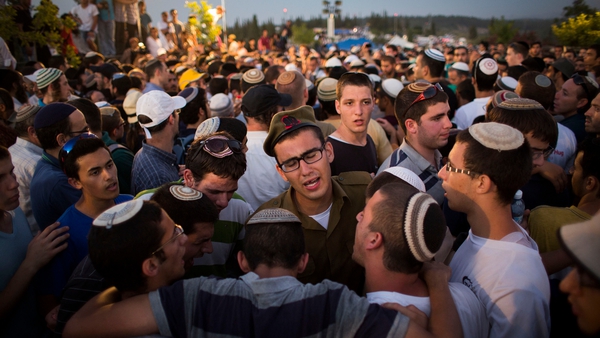