The funerals have taken place of three young Israelis, who were abducted and killed in the occupied West Bank.

Israel has accused Palestinian group Hamas of murdering the students and has threatened retribution.

Hamas has warned Israel against waging wide scale aggression against the Palestinian people.

The Israeli army earlier demolished the West Bank homes of two main suspects in the kidnap and killing of three.

Witnesses said the houses of Marwan Qawasmeh and Amer Abu Eisheh, Hamas members in the city of Hebron, were blown up, in what a human rights group said was the first punitive demolition since Israel halted the practice in 2005.

Hamas warned that any Israeli action to punish it for the killings would open "the gates of hell".

"If the occupiers carry out an escalation or a war, they will open the gates of hell on themselves," Hamas spokesman Sami Abu Zuhri said.

Israel has repeatedly accused Hamas of kidnapping the teenagers and began a major crackdown on the movement's West Bank infrastructure.

Hamas has dismissed the allegations as "stupid" with Mr Zuhri accusing Israel of fabricating the kidnapping as an excuse to crack down on the Islamist movement.

Yesterday Israeli security forces found the bodies of Gil-Ad Shaer and US-Israeli national Naftali Fraenkel, both 16, and Eyal Yifrah, 19, in a field near Hebron.

The teenagers had apparently been shot soon after having been abducted while hitch-hiking earlier this month, officials said.

Israel's security cabinet, which held an emergency session late yesterday and met again today, was split on the scope of any further action in Hebron and the West Bank, officials said.

The Israeli military said aircraft attacked 34 sites, mostly belonging to Hamas, though its statement did not link the strikes to the abductions.

Instead, it cited 18 Palestinian rocket launches against Israel from Gaza in the past two days which Israeli officials have said Hamas carried out.

At the security cabinet meeting, the army proposed "considered and moderate actions" against militants in the West Bank in response to the teenagers' deaths, said officials.

Any sustained campaign there could undermine Palestinian President Mahmoud Abbas.

But the cabinet did not agree on a future course of action at that session, officials added.

The kidnapping appalled Israelis who rallied behind the boys' families in a display of national unity.

"They were kidnapped and murdered in cold blood by beasts... Hamas is responsible and Hamas will pay," Mr Netanyahu said in a statement last night.

They named the dead youth as Yusuf Abu Zagher, 18, and said the incident appeared unrelated to Israeli operations in the southern part of the territory.

Since January, seven Palestinian children or youths have been killed by Israeli forces.

In a statement, Tánaiste Eamon Gilmore called for restraint.

He said: "I have been deeply saddened to learn of the deaths of the three Israeli teenagers who were abducted in the West Bank on 12 June, and for whose safe return we had all hoped.

"I condemn their killing, for which there can be no justification, and hope that the perpetrators are swiftly apprehended.

"I extend our deepest sympathy and condolences in this time of grief to their bereaved families, and to the families of all those killed in the area in recent weeks.

"It is important also that all authorities react responsibly and with restraint, and that there be no further innocent victims of this reprehensible crime." 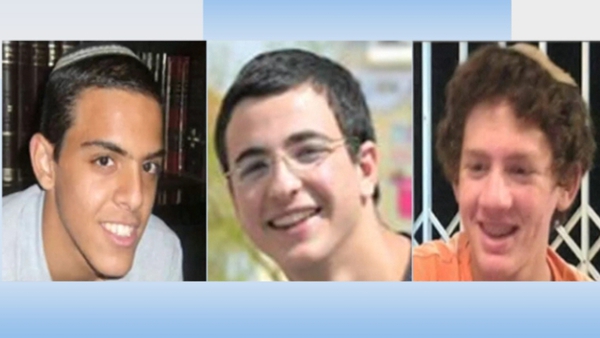