Key players in the world of online payments will be in Dublin this week to debate why and when people will start moving to Bitcoin - the divisive virtual payment system.

Supporters have claimed bitcoin is on course to revolutionise global trading in the same way email, MP3s and digital photography flipped lifestyles and industries on their head.

Much of the commentary and criticism of the radical currency has focused on its volatility, and its massively upward curve in value - it went from $14 in January 2013 to more than $1,100 late in the year before collapsing to $400 dollars in April this year.

The meeting at the RDS conference centre on Thursday will examine how the focus can be moved from whether bitcoin is a viable currency to how it will be used to pay for goods and services a decade from now.

Some entrepreneurs backing the new way of doing business say ultimately it will be as recognisable as a dollar bill's green seal.

Others are promoting the moral imperative of the currency claiming that it can open the door to economic participation for six billion consumers in developing countries.

Nicolas Cary, creator of Blockchain.info, an online wallet used to store bitcoin and database of all transactions, said ten years from now bitcoin's success will be obvious.

"The digital world is part of our DNA now, it's part of how we share our experiences, how we consume entertainment, and how we stay in touch with loved ones," he said.

"It's impacting how we live our lives including how we pay for things.

"Let's not kid ourselves. Why can't money be digital? The financial future of the world is at stake so it's best not to have our heads stuck in the sand."

Among those attending the BITFIN conference are Jeremy Allaire, founder of Circle, a Boston and Dublin-based company which has developed tools to simplify the use of digital currency for consumers.

It has raised about $26m funding.

It is also the first time a policymaker from a central bank will address a conference on bitcoin with Gareth Murphy, director of markets supervision at the Central Bank, a guest speaker.

Some people from the world of global finance are expected to attend privately.

The origin of bitcoin is shrouded in mystery. The creator, using the pseudonym Satoshi Nakamoto, launched the protocol in 2009, and ceased all communication in 2011.

The concept was to provide open source software to create a trusted peer-to-peer currency not under the authority of a country, government or central bank.

Fergal Murray, organiser of the conference and a technology entrepreneur, said only last year bitcoin was being viewed as anything from a ponzi scheme to a fringe experiment for geeks.

"A year later it is being recognised by a rapidly growing people as a completely transformative technology, but it is difficult to use, explain and understand," he said.

Mr Murray said companies such as Circle, Blockchain.info, Bitpay and Bitnet are rapidly building the tools and interfaces so regular people can use bitcoin safely and cash it in for familiar currencies without risk.

"The Googles and Facebooks of bitcoin have not yet been conceived," he said.

"For now - people are focused on bitcoin as a payments network and currency. The regulatory conversation is now getting started in earnest.

"Banks, financial institutions, and payment processors will seek to defend their current positions and secure new competitive advantage with blockchain technologies, but the future looks more and more likely to be open and free."

Bitcoin has been compared it to the internet in 1993 when it was usable only by a select group of techies.

It took the development of easy-to-use web browsers to make the internet accessible to everyone.

Opponents, however, remain fearful that a digital currency that has no regulator or central bank is ripe for abuse by hackers and money launderers.

Defunct Tokyo-based bitcoin exchange Mt Gox, is an example as it went bust after it lost about 850,000 bitcoins while the Silk Road, an internet black-market bazaar that accepted bitcoin, has been shut down and operators' profits seized.

Bitcoin's status is as divisive at government level. The US classes it as property not currency and it is therefore taxable.

China and Russia have remained hostile to the currency.

Elsewhere, Canada has recognised it as money and will regulate it while the Isle of Man is introducing controls on its use effectively recognising it.

Blockchain's Mr Cary added: "There is a misconception that bitcoin and governments are at odds with each other. This is incorrect.

"Bitcoin is an invitation to participate in a better world and take steps into the financial future."

He added: "Barnes and Noble, Tower Records, and Blockbuster laughed at the digitisation of their products and services - but now these business are bankrupt.

"The internet hasn't been kind to industries that can't embrace digital efficiencies - and finance is next if they cannot acknowledge the changing tides".

The BITFIN conference runs on Thursday and Friday this week at the RDS. 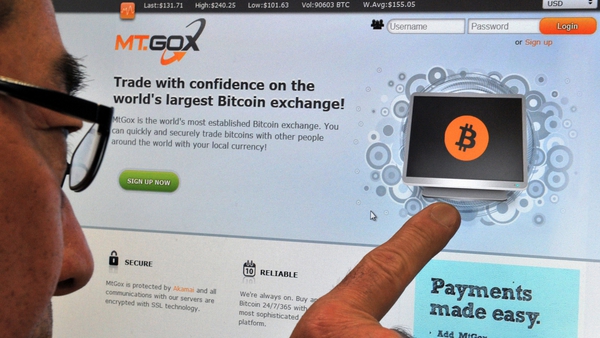