Sunni fighters seized a border post on the Iraq-Syria border, security sources said, smashing a line drawn by colonial powers almost a century ago with the aim of creating an Islamic Caliphate stretching from the Mediterranean Sea to Iran.

The militants, led by the Islamic State of Iraq and Syria (ISIS), also known as ISIL, first moved into the nearby town of al-Qaim on Friday, pushing out security forces, the sources said.

Once border guards heard that al-Qaim had fallen, they left their posts and militants moved in, the sources said.

Sameer al-Shwiali, media adviser to the commander of Iraq's anti-terrorist squad, told Reuters that the Iraqi army was still in control of al-Qaim.

Al-Qaim and its neighbouring Syrian counterpart Albukamal are on a strategic supply route. A three-year civil war in Syria has left most of eastern Syria in the hands of Sunni militants, including the Albukamal-Qaim crossing.

The Albukamal gate is run by al Qaeda's official Syria branch, the Nusra Front, which has clashed with ISIL but has also agreed to localised truces when it suits both sides.

The head of the Syrian Observatory for Human Rights monitoring group, Rami Abdulrahman, said ISIS has pushed the Nusra Front out from many areas of eastern Syria in the past few days and their capture of al-Qaim will allow them to quickly move to the Syrian side.

ISIS already controls territory around the Abukamal gate, effectively pinching the Nusra Front between its forces in Syria and those in neighbouring Iraq, said Mr Abdulrahman, who tracks the violence.

ISIS has captured swathes of territory in northwest and central Iraq, including the second city, Mosul. They have seized large amounts of weaponry from the fleeing Iraqi army and looted banks.

World powers are deadlocked over the crises in Iraq and Syria. Shia Iran has said it will not hesitate to protect Shia shrines if asked by Baghdad but Sunni-run Saudi Arabia has warned Iran to stay out of Iraq.

US President Barack Obama has offered up to 300 US special forces advisers to help the Iraqi government recapture territory seized by ISIS and other Sunni armed groups across northern and western Iraq.

But he has held off granting a request for air strikes to protect the government and renewed a call for Iraq's long-serving Shia prime minister, Nuri al-Maliki, to do more to overcome sectarian divisions that have fuelled resentment among the Sunni minority.

The fighting has divided Iraq along sectarian lines. The Kurds have expanded their zone in the northeast to include the oil city of Kirkuk, which they regard as part of Kurdistan, while Sunnis have taken ground in the west.

The government has mobilised Shia militia to send volunteers to the front lines.

They carried rocket-propelled grenades, semi-automatic rifles and trucks had mounted long-range rockets, including the new 3-metre "Muqtada 1" missile, named after Shia cleric Muqtada Sadr, who has tens of thousands of followers.

Mr Sadr has yet to throw his fighters into the recent wave of fighting but has criticised Mr Maliki for mishandling the crisis.

The fighting, with strong sectarian overtones, is pushing the country towards civil war.

"Last night, three attacks on Baiji refinery were repelled ... More than 70 terrorists were killed and more than 15 vehicles were destroyed," said Major-General Qassimal-Moussawi, spokesman for the Iraqi military's commander-in-chief.

He showed aerial footage of cars and people being blown up but details of the fighting could not be independently confirmed.

As in Syria, ISIS has started to clash with other Sunni militias in Iraq. In the town of Hawija, ISIS and members of the Naqshbandi Army, made up of former army officers as well as loyalists to Saddam Hussein's Baath party, started fighting on Friday evening, witnesses said.

They said the clashes, a power dispute, killed 15 people.

"Hawija is falling apart," said a senior tribal figure from the community, just days before the clashes. "There are so many groups working with ISIS. Each group has its agenda." 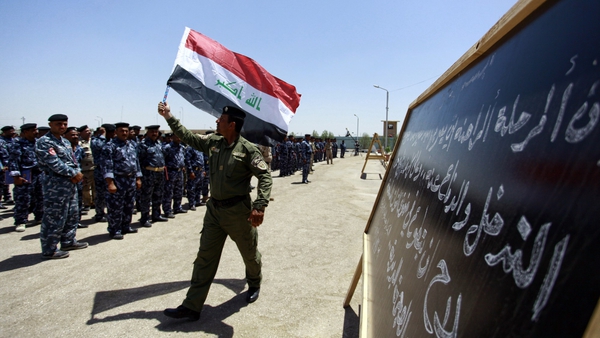