The HSE has announced the make-up of the expert panel that is to examine how medical card needs should be taken into account in the context of medical card eligibility.

The panel is to be chaired by Prof Frank Keane, Past President of the Royal College of Surgeons Ireland and will be made up of 23 medical professionals as well as a patient representative.

The panel is to identify a range of medical conditions, in order of priority, which would benefit most from medical card eligibility and has been asked to report to the Director General of the HSE by September this year.

A public consultation is also to commence tomorrow to seek the views of the public, which will inform the work of the panel.

The Director General of the HSE said that the expert panel is an important part of the response to the current issues around medical cards.

Speaking to RTÉ’s Six One, Tony O’Brien said that it is important to stress that anyone with an discretionary medical card now will not be losing it and that the review is suspended.

He said there may be people who have arrived home after being away and may find letters that were posted before the review suspension was announced and these people can contact the HSE for assurance that the review has been suspended.

Mr O’Brien stated the Minister for Health is charged with making arrangements to ensure that the HSE has the legal right to return medical cards that have been lost in the review and the Government has indicated that it intends to do this very quickly.

He said the establishment of the expert panel is about putting a real fix to the situation in place. Mr O’Brien commented the legislation goes back to 1970 and is based on financial means and not on medical needs.

Mr O'Brien said the HSE had pulled together a very wide ranging expert group that will analyse all of the chronic long term and life limiting conditions and draw up a priority list.

He said the current legal framework is a product of its time and societal aspirations have clearly moved on to the point where a purely financial test of who should get a medical card is no longer acceptable, and the atmosphere now exists in which medical entitlement can be examined based on medical need.

Mr O'Brien added that the expert group will be work throughout the summer to develop a prioritised list so that in the future, government will have the opportunity to give effect to its intentions to have a policy framework and legislation that allows people to obtain medical cards because they need them for medical reasons and not financial reasons.

Taoiseach Enda Kenny, meanwhile, has said that he has confidence in the Minister for Health James Reilly and all of his cabinet team.

Asked about Minister Reilly's comments to the Fine Gael parliamentary party in relation to medical cards, he said cabinet decisions were collective decisions.

He said he had made it clear to the Labour Party that he would work with whoever they select as leader "in fulfilling the mandate given to the Government by the people in 2011".

Mr Kenny said he was awaiting the report from the expert panel which was due in September and he looked forward to the situation when medical conditions were the basis upon which medical card coverage was awarded.

Minister for Social Protection Joan Burton earlier said she does not agree with Mr Reilly's claims that the “political will” did not exist on medical card reform until last week.

Speaking on RTÉ’s Today with Sean O’Rouke, Ms Burton said he was very much a part of the Cabinet that made the decisions.

She said: “I actually don't agree with him there because the desire has been among everyone in the Cabinet - and it's a collective Cabinet and the Cabinet makes collective decisions, of which I'm a part but of which he is also very much a part .

“I don't really understand because Dr Reilly was at the Cabinet table and he was a party to those discussions and obviously, as the line minister, Dr Reilly himself would also have to be responsible for his decisions.”

Yesterday, Mr Reilly told the Fine Gael Parliamentary meeting that he had not received the support of some of his Cabinet colleagues on the medical card issue.

Mr Reilly said he did have the support of the Taoiseach.

He told the meeting the political will to resolve the issue was not there until last week and it was a budgetary issue.

The minister apologised to those who had lost their medical cards and he said that whoever is Minister for Health, whether it is him or someone else, there was no more room for cuts in Health as it was "cut to the bone." 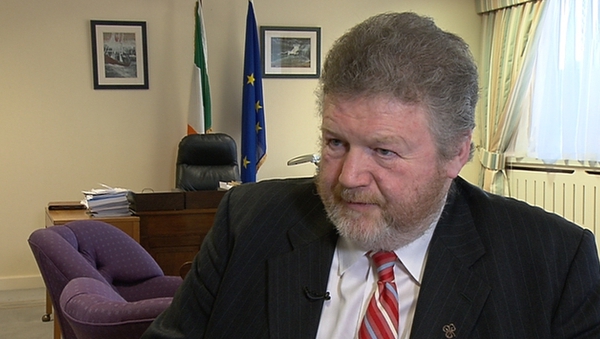