Vladimir Putin held his first face-to-face talks with a western leader since the eruption of the Ukraine crisis when he met British Prime Minister David Cameron in Paris.

The encounter in a customs area of the French capital's Charles de Gaulle airport on Thursday evening came after Mr Cameron attended a meeting of G7 leaders which issued a warning that Russia faced further sanctions if it does not stop meddling in its southern neighbour's affairs.

Mr Putin is due to meet with French President Francois Hollande before attending Friday's ceremony in Normandy for the 70th anniversary of D-Day.

No formal meeting is scheduled with Barack Obama but the US President signalled that he was likely to have some kind of exchange with his Russian counterpart.

"I have no doubt that I'll see Mr Putin," Mr Obama said at the G7 talks in Brussels. "Should we have the opportunity to talk I'll deliver the same message as I have throughout this crisis.

"If Russia's provocations continue, it's clear from our discussions here the G7 nations are ready to impose additional costs."

The leaders of the G7 industrial nations discussed the global economy, energy security and climate change on the second day of their meeting in Brussels.

However, the event remains overshadowed by events in Ukraine and questions of how to engage with Russia.

Last night, the G7 leaders condemned what they termed the Russian Federation's "continuing violation" of Ukraine's sovereignty and threatened to "intensify sanctions".

Today they warned, in a clear rebuke to Russia, that manipulating energy supplies to intimidate one's neighbours is unacceptable.

The leaders say that they need to diversify their energy systems to avoid getting blackmailed.

"The use of energy supplies as a means of political coercion or as a threat to security is unacceptable," they said in a draft summit statement.

Russia supplies about 30% of Europe's gas, with about half of that transiting Ukraine.

As the Ukraine crisis has deepened, Russian state-controlled giant Gazprom has doubled gas prices and demanded billions in back payments from cash-strapped Ukraine.

It has threatened to turn off the taps if it does not get its money.

Trying to avoid a repeat of the 2006 and 2009 crises when Gazprom cut supplies, the European Union has brought Ukraine and Russia together for talks, with officials due to report back shortly on a possible deal.

The G7 - Britain, France, Germany, Italy, Canada, Japan and the United States -  said they would do more to diversify supplies and resources to ensure future energy security.

"The crisis in Ukraine makes plain that the energy security must be at the centre of our collective agenda and requires a step change to our approach to diversifying energy supplies and modernising our energy infrastructure," they said in the draft.

The G7 will also urge the International Energy Agency, as well as the EU, to propose new ways to help prevent energy wars.

"The so-called G7 even talks about the measured actions of the Ukrainian army against its own people," Mr Medvedev told ministers.

"This is cynicism without limit." 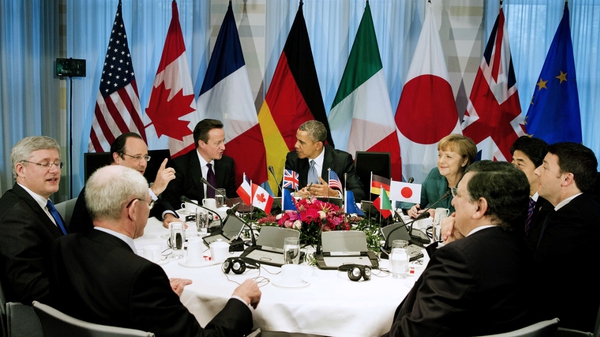