They agreed to hold their own summit this year instead of attending a planned G8 meeting in Sochi and to suspend their participation in the G8 until Russia changes course.

The G7 leaders, who met on the sidelines of a nuclear security summit in The Hague, said they would convene again in Brussels in early June.

This will be the first time since Russia joined the G8 in 1998 that it will have been shut out of the annual summit of industrialised democracies.

The G7 leaders said they remain ready to intensify action, including coordinated sector sanctions, on Russia in the case of any further destabilisation of the situation.

Earlier, the White House said as long as Russia flagrantly violated international law in Ukraine "there is no need for the G7 to engage with Russia".

National security adviser Ben Rhodes said: "What we're looking at is how we engage with Russia in the coming months and years.

"If there came a point where Russia would de-escalate the situation and abide by international law, we would not want to foreclose the potential that the G7 would engage with them."

Russian Foreign Minister Sergei Lavrov said this afternoon that it would be no "great tragedy" if Russia was expelled from the G8.

Mr Lavrov also met his Ukrainian counterpart on the sidelines of the G7 summit.

The Russian foreign ministry said Mr Lavrov and Andriy Deshchytsya met for the first time since the annexation of Crimea.

Meanwhile, Russian forces stormed a Ukrainian navy ship that they had earlier blocked in a lake in western Crimea and which had been one of the last vessels to avoid falling under Kremlin control.

Witnesses reported plumes of smoke rise over the Kostyantyn Olshanskiy moments after the Russian forces launched their Donuzlav Lake assault.

The G7 said that in response to Russia's violation of Ukraine's sovereignty and territorial integrity it had imposed a variety of sanctions against Russia and those individuals and entities responsible.

"We remain ready to intensify actions including coordinated sectoral sanctions that will have an increasingly significant impact on the Russian economy, if Russia continues to escalate this situation," the G7 said.

In what has become the biggest confrontation between the East and West since the Cold War, the US and the European Union have imposed sanctions targeting some of Mr Putin's closest political and business allies.

However, it was unclear whether they went far enough to influence Russia.

Western governments are struggling to find a balance between putting pressure on Mr Putin, protecting their own economies and avoiding triggering a vicious cycle of sanctions and reprisals.

Russia said this afternoon it had banned entry for 13 Canadian politicians and public figures, after Canada imposed sanctions against seven Russian and three Crimean senior officials over the crisis in Ukraine.

"This step has been taken as a reaction to the unacceptable actions of the Canadian side which have brought serious damage to bilateral relations," it said in a statement.

It accused Canada of ignoring the referendum results where Crimea voted to become part of Russia and instead supporting the "current illegitimate regime in Kiev" which took power following the overthrow of President Viktor Yanukovych.

The statement said that Russia remained open to constructive dialogue with Canada, including on Arctic issues. "We need such cooperation no more than Ottawa does," it added.

Others banned from entering Russia include Wayne Wouters, Canada's top civil servant, the leader of the government in parliament, Peter Van Loan, as well as Paul Grod, the head of the Ukrainian Canadian Congress, which represents the Canadian diaspora.

The sanctions came after Mr Harper at the weekend become the most senior world statesman to visit Kiev after the fall of Mr Yanukovych.

Canada, with the world's third-largest population of ethnic Ukrainians, was the first Western power to recognise the ex-Soviet state's independence in 1991.

Ukraine's acting President said Ukraine is pulling its forces out of Crimea in the face of threats and pressure from the Russian military.

Oleksandr Turchynov was speaking in parliament after Russian troops entered a key Ukrainian marine base near Feodosia, crowning a gradual takeover of Ukrainian military facilities on the peninsula.

Mr Turchynov said the decision had been taken in the face of "threats to the lives and health of our service personnel" and their families.

"The National Defence and Security Council has instructed the Defence Ministry to carry out a re-deployment of military units in Crimea and carry out the evacuation of their families," he said.

A Ukrainian serviceman said the port of Feodosia was one of the few military facilities still flying a Ukrainian flag in Crimea after Russia's annexation.

First Lieutenant Anatoly Mozgovoy told Reuters that shots were fired but the Ukrainian soldiers were unarmed.

He confirmed the base has been taken over.

Russian forces captured part of the base of the 1st Separate Marine Battalion, Ukraine's top military unit, earlier this month, as Russia was seizing the Black Sea peninsula.

However, Ukrainians had previously appeared to be in control of the armoury, the barracks and other facilities within the compound. 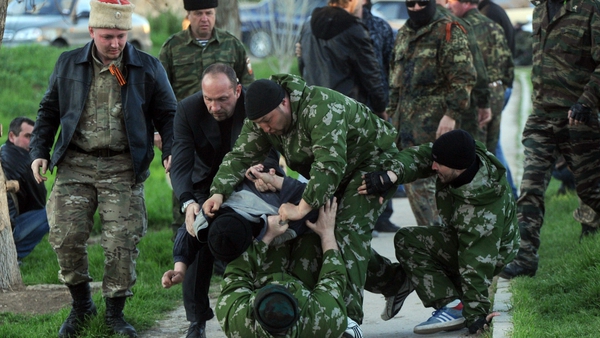