Speaking at Leinster House this morning, Mr Kelly said the party needs to be renewed and the deputy leader needed focus on structure and organisation.

He said he had a deep-rooted knowledge of the Labour Party and knew its membership extremely well.

He was proposed and seconded by TDs Willie Penrose and Robert Dowds.

Mr Kelly was accompanied by a number of other TDs and Senators, including Ann Phelan, who yesterday proposed Minister for Social Protection Joan Burton for the leadership.

She said she agreed that a Burton-Kelly combination would represent a "dream ticket".

Mr Kelly himself said that Ms Burton would make a fantastic leader.

Mr McCarthy said the contest is not about Leinster House or the parliamentary party, but about membership of the party and reinvigorating and reconnecting with voters.

He also said Labour needs to refocus its efforts in Government and both parties need to set new targets.

Mr McCarthy told RTÉ's News at One that Ireland is no longer in a Troika arrangement and it is important to put money back in people's pockets.

Mr Sherlock said he wanted to part of the process of renewal and help rebuild the party.

Nominations for the leadership and deputy leadership of the party remain open until Tuesday.

Meanwhile, Minister of State at the Department of Health Alex White is set to announce tomorrow morning that he will contest the leadership.

He is due to make a speech on the Rosie Hackett Bridge in Dublin at 11am.

Minister of State for Housing and Planning Jan O'Sullivan has said she will be supporting Mr Kelly's bid.

I will be supporting Alan Kelly for Deputy Leader

Tánaiste Eamon Gilmore announced on Monday that he was standing down as leader in the wake of big losses for the party in the European and Local Elections.

This morning, TD Arthur Spring said he is considering putting his name forward for one of the positions.

Speaking on RTÉ's Morning Ireland, Mr Spring said "passion and energy" was needed for the role and he intended to do some soul searching to see what he can bring to the table.

The Kerry North-West TD said the party is under "no illusions" about the enormity of the problems facing Labour.

Minister for Public Expenditure Brendan Howlin has ruled himself out of the election.

Minister for Communications Pat Rabbitte said he expects there will be a contest for the leadership because of the number of members of the parliamentary party who have said there should be.

On his personal preference, he said as a former leader he has a licence to keep quiet, and he would not predict who would win. 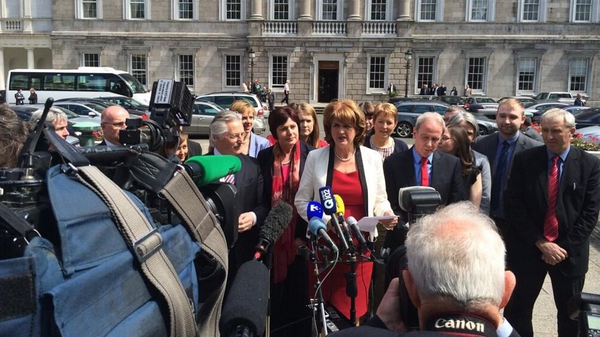 Burton says wrong for Labour to walk away from Government