Minister for Social Protection Joan Burton has announced her intention to run for the leadership of the Labour Party.

In a statement this afternoon, Ms Burton acknowledged that the party had had a difficult weekend and voters are unhappy with its performance in Government.

She said Ireland has "reached the limits of austerity as the main tool of economic policy" and people want to know when their own finances will repair and start to grow and when their communities will recover.

Ms Burton, who is the party's deputy leader, is considered a frontrunner to succeed Eamon Gilmore.

She said it would be really wrong for the party to walk away from Government and cause instability.

Speaking on RTÉ's Six One, she said Labour had gone into Government with its eyes wide open and had promised to do its best and remains committed to that.

Deputy Burton also described what has happened in relation to medical card reviews as unacceptable and said she had spoken to the Taoiseach on the issue over the last month.

Meanwhile, Minister for Public Expenditure and Reform Brendan Howlin this evening ruled himself out of a leadership bid.

A number of ministers and TDs have said they are considering running for the position and nominations opened last night following a meeting of the party's executive board.

A number of TDs have also expressed an interest in becoming the deputy leader.

Earlier, Kevin Humphreys confirmed that he will not be running for deputy leader.

Nominations for both positions will close next Tuesday.

Meanwhile, the parliamentary party meets later today for the first time since Labour's poor performance in the Local and European Elections, and since Mr Gilmore announced his intention to step down.

Eight members of the parliamentary party had put down a motion of no confidence in him on Monday, but Mr Gilmore said he had already decided to resign.

Mr Hannigan has said the Labour Party is at risk of being wiped out at the next election and consigned to the history books, if "tough and resolute" action is not taken now.

The Meath East TD said voters gave the party its final warning in the Local and European Elections on Friday.

Mr Hannigan said he is considering whether to contest the leadership and he thinks the leader should come from "a new generation, with fresh thinking and resolve".

He called for a complete clear out of the front bench.

However, party colleagues have called for calm.

He said he would not agree with what he described was an ageist argument for clearing out the front bench.

Mr McCarthy also said there was no desire for a consensus candidate.

Labour's Ann Phelan also appealed for calm and for people to be mindful of all their party colleagues.

Parliamentary party chairman Jack Wall said the members would decide the outcome of the contest.

Earlier, Minister for Transport Leo Varadkar said the Coalition is stable and work will go on once Labour elects a new leader.

The Fine Gael TD said the Programme for Government would continue as planned to improve the economy. 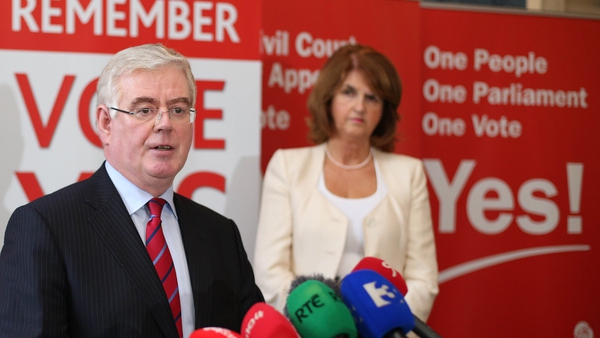