Tánaiste and outgoing Labour leader Eamon Gilmore has said the Coalition will not be destabilised by the election of a new Labour leader.

He was speaking in Brussels before a meeting of the Party of European Socialists.

Mr Gilmore said both Labour and Fine Gael must heed the very clear message given to them by the people of the country last Friday.

He said voters were saying they understood what needed to be done to rescue the country from economic disaster, but their household budgets were down.

Mr Gilmore said the Government must address this in future Budgets.

His comments came as several Labour party members are considering running for the leadership of the party.

The Labour Party Executive Board have agreed arrangements for the election of leader and deputy leader as follows:

Nominations are now open and will close at midday on Tuesday, 3 June.

The count will take place on Friday 4 July.

No one has yet declared but several are considering whether to run for the leadership.

Among them are thought to be Minister for Social Protection Joan Burton, Minister for Public Expenditure and reform Brendan Howlin, Ministers of State Alex Whyte and Alan Kelly and TD Dominic Hannigan.

Mr Howlin did not rule himself out of running for the Labour leadership.

He said the party had serious business ahead and it should remain at the heart of reform.

Mr Howlin said Labour needed to respond very strongly to the message from the ballot boxes.

Minister of State Alan Kelly has confirmed he will be putting his name forward for a leadership position in the party.

Mr Kelly said he had not yet decided if he would run for leader or deputy leader.

Speaking on RTÉ's Today with Seán O'Rourke, he said he felt "a generational change" was needed at leadership level.

He said senators, TDs and councillors had given him a lot of support in recent weeks.

There has also been attention on Minister of State Alex White, but Sean Sherlock and Willie Penrose have ruled out any leadership challenge.

Minister for Education Ruairí Quinn has criticised the seven TDs and one senator who submitted a motion of no confidence in Mr Gilmore.

Mr Gilmore had faced two motions of no confidence after the party's poor performance in the European and Local Elections.

He announced his resignation yesterday and said he would stand down in July when his successor is chosen.

Mr Quinn said Mr Gilmore deserved the courtesy, as Labour's most successful leader, to have one of the eight Labour members who supported the motion to pick up the phone and tell him.

He also said he would wait and see which candidates emerged before endorsing any particular person.

Party rules state that in the event of a vacancy in the leadership, the deputy leader becomes acting leader.

Labour TD Ciara Conway said some party members were not listened to in dealing with social and economic issues in recent months.

Speaking on RTÉ's Morning Ireland, Ms Conway said she stands over her decision to support a motion of no-confidence in Mr Gilmore.

The Waterford TD said there was no indication that the Tánaiste was to step down prior to the "Group of Eight" putting forward the motion.

She said those who put down the motion had spoken to Mr White over the weekend and he had indicated that he would support the motion.

Ms Conway said the next party leader needs to be someone who will attack social issues with vigour.

She said there is talent in the party and reason to look to the younger generation in filling the leader and deputy leader roles.

Ms Conway and Labour TD Aodhán Ó Ríordáin have said they would consider putting themselves forward as deputy leader.

Speaking on the same programme, Mr Ó Ríordáin said that there is "no rulebook" when it comes to deciding that a party leader has to go.

He said he regretted that some in the Labour Party had to come to the conclusion that a new leader was needed, but once it was decided "you do what you have to do", he said.

He said a lot of work to repair damaged relationships would have to be done over the next weeks, months and years.

Mr Ó Riordáin said the party was now "in a new space" and needed to move on to see the Labour Party return to what it believes in.

Earlier, Dublin's Lord Mayor said being a high profile Labour candidate in the local elections was a significant disadvantage.

Mr Quinn said Labour played like a team in Government, which eventually led to them being punished by voters.

He said he was sad to see Mr Gilmore resign.

He said he did not see Mr Gilmore's resignation as inevitable and would have preferred the Labour Party to refocus its efforts while retaining its leader. 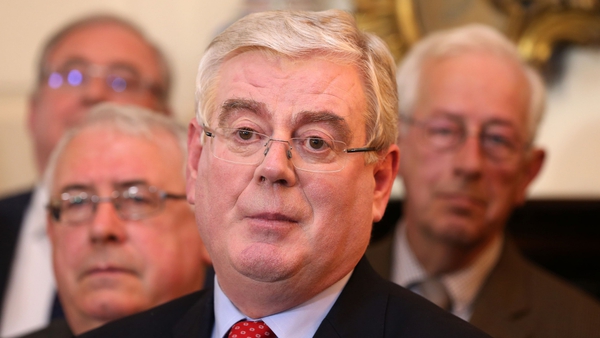 Gilmore resigns as Labour leader in aftermath of elections