There will be a full recheck for the final European Parliament seat in the Midlands-North-West constituency, after Independent Marian Harkin was found to be leading Fianna Fáil's Pat 'The Cope' Gallagher by 275 votes.

Meanwhile, six of the 949 council seats available remain to be filled in the local authority elections.

A recount will be held in the Dún Laoghaire electoral area.

There will be a re-vote in the Ballybay-Clones electoral area of Monaghan on 7 June following the death of councillor Owen Bannigan.

Mr Carthy received 7,911 transfers from eliminated Fianna Fáil candidate Thomas Byrne, which was enough to see him pass the quota.

She said she had no desire to contest another Dáil election and ruled out a second attempt at securing her party's nomination to contest the Presidency.

Ms McGuinness paid tribute to her running-mate, Jim Higgins, whose elimination resulted in her reaching the quota.

Mr Higgins plans to retire from political life after he lost his seat earlier today.

Fine Gael's Seán Kelly and Deirdre Clune have both been elected on the 12th count in the European South constituency without reaching the quota.

Sinn Féin's Liadh Ní Riada and Fianna Fáil's Brian Crowley are the other two MEPs for the constituency.

She exceeded the quota on the seventh count and joins another outgoing MEP, Sinn Féin's Martina Anderson.

Ms Anderson topped the poll and was elected on the first count yesterday.

The third sitting MEP, Ulster Unionist Jim Nicholson, will be re-elected when the eighth count concludes.

He leads the SDLP's Alex Attwood by 21,012 votes and that gap will not be bridged when the surplus of Ms Dodds is distributed.

Northern Ireland First Minister Peter Robinson said that with elections now over he is keen to return to negotiations on issues unresolved by the Haass talks and on welfare reform. 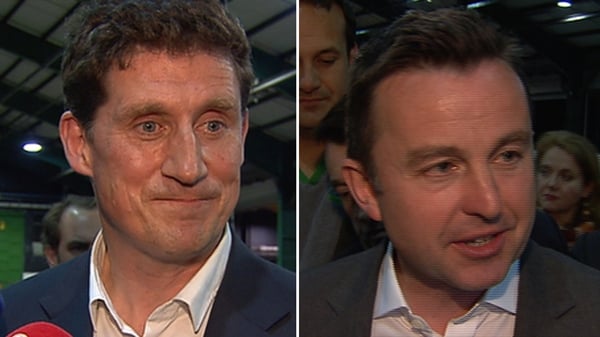