At least three people died and three others were injured in a blast in the central Nigerian city of Jos targeting football fans watching the European Champions League final, police said.

"So far we have three dead, three injured," Chris Olakpe, the commissioner of police for Plateau state, told AFP.

Mr Olakpe added that one of the victims was "consumed by his IED (improvised explosive device)" which "exploded before the viewing centre" but declined to confirm reports that it was an attempted suicide attack.

Suspected Islamist Boko Haram gunmen rampaged through three villages in northern Nigeria, killing 28 people and burning houses to the ground in a pattern of violence that has become almost a daily occurrence, according to police and witnesses.

All three attacks happened on Thursday in remote parts of Borno state, the epicentre of Boko Haram's increasingly bloody struggle for an Islamic kingdom in religiously mixed Nigeria.

One took place right next to Chibok, by the Cameroon border, from where more than 200 school girls were abducted last month.

The most deadly was in the town of Kerenua, near the border with Niger. Scores of militants opened fire on residents, killing 20 of them, and burned houses, a police source said.

Since the girls' abduction on 14 April, at least 450 civilians have been killed by the group, according to a Reuters count.

A spate of bombings across north and central Nigeria has killed hundreds, including two in the capital Abuja and one in the central city of Jos on Tuesday that killed 118 people.

In a sign the city could be targeted again, a botched suicide bombing that was meant to target an open air viewing of a football match in the central Nigerian city of Jos killed just the bomber on Saturday night, a witness told Reuters.

The bomber approached Jos View Centre while people were watching Real Madrid play Atletico Madrid in the Champions League Final, but failed to get there before his car exploded, Mohammed Shittu, a local journalist at the scene said.

The source said some phone signals to the militants had been tracked to Niger itself, suggesting they may have been directed from there. Dozens had been wounded by bullets, he said.

Another attack occurred in a small village of Kubur Viu, a few kilometres away from Chibok, resident Simeon Yhana said.

The police source concurred with the attack and toll.

"They killed five people. This place is right next to Chibok. The military is supposed to be protecting this area but we fear these people (Boko Haram) are coming back," Mr Yhana said.

Militants shot dead three other people during an attack on the village of Kimba, the police source said.

Nigerian President Goodluck Jonathan was in South Africa, his office said, to discuss ways of tackling Islamist militancy across the continent with African heads of state.

Nigeria and its neighbours say Boko Haram - which has killed thousands during its five-year-old insurgency in Africa's top oil producer - now threatens the security of the whole region.

The insurgents initially attacked mostly security forces and government officials after they launched their uprising in northeast Borno state's capital Maiduguri in 2009.

When Mr Jonathan ordered an offensive a year ago to flush them out, civilians formed vigilante groups to help out - making them targets too.

Nigeria accepted help from the United States, Britain, France and China last week and around 80 US troops were arriving in Chad to start a mission to try to free the girls, who remain in captivity. 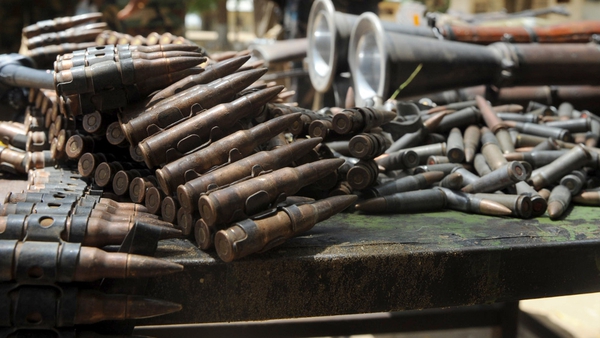