Former minister for justice Alan Shatter has said he will be accepting the €70,000 severance payment he is entitled to, but will be donating it to the Jack & Jill Foundation.

Mr Shatter said he thought it appropriate to mark the fact that ministerial severance payments are no longer payable.

The former minister was speaking to journalists on the Dáil plinth.

He said he was surprised to find out after resigning that he was eligible for a severance payment given that the legislation abolishing such payments had been passed.

He was informed of it by letter from Minister for Public Expenditure and Reform Brendan Howlin's department on Tuesday.

Mr Howlin has now signed the ministerial order to bring that legislation into force.

Mr Shatter said he reflected on the fact he was still entitled to the payment and wondered what the appropriate way to deal with the €70,000 payment was.

He said that had he retained the payment it would be worth €34,000.

However, because of the tax incentives to encourage people to give to charities, it will be worth in the region of €50,000 to the Jack & Jill Foundation.

Mr Shatter said he has great admiration for the foundation's work supporting families of children born with serious neurological conditions and other major physical difficulties.

He said he was happy to be of assistance.

Jonathan Irwin of Jack & Jill, who was accompanying Mr Shatter, said he was stunned to get the call last night from Mr Shatter and that this donation is the largest philanthropic donation this year.

Mr Shatter said none of his colleagues knew of the decision he was making and he hoped it would be seen as an appropriate way to mark the end of ministerial severance payments.

Asked would he be staying on as a TD, he said he was not going anywhere.

The Taoiseach has given a general approval to Mr Shatter's decision to donate the severance pay to charity.

Speaking in Mullingar this afternoon, Enda Kenny said nobody could complain about the children supported by the Jack and Jill foundation benefiting from the money.

The Taoiseach said he did not ask Mr Shatter about the issue yesterday because he expected that no minister would accept severance pay.

He said in this sense Mr Shatter is not benefiting from an entitlement in law.

Mr Kenny said: "The full benefit of whatever Mr Shatter’s entitlement was in this case goes to the very challenged children in the care of the Jack and Jill Foundation."

Mr Kenny acknowledged his preference would have been for the matter to be signed off, but he said he now hopes the children will benefit.

When asked by the media if he thought Mr Shatter had done the honourable thing, the Taoiseach said they should "go and ask the children" cared for by Jack and Jill, and their parents.

Before Mr Shatter's announcement, Tánaiste Eamon Gilmore had said he would be very surprised if Mr Shatter did not do "the honourable thing" in relation to the severance payment.

Mr Gilmore said he had never been in any doubt about Mr Shatter's intentions.

However, he said he had not spoken to the former minister about the issue.

Mr Gilmore said it was his belief that from what he knew of Mr Shatter, he would honour the decision that he was involved in that brought about an end to severance payments for retiring ministers.

Minister for Social Protection Joan Burton this morning said she hoped Mr Shatter would not take a severance payment.

Ms Burton said she was with Mr Shatter in the Cabinet when they drafted the legislation and he was a firm supporter of it.

Yesterday, Minister for Transport Leo Varadkar said it would be better if Mr Shatter made a decision on the payment before tomorrow's elections. 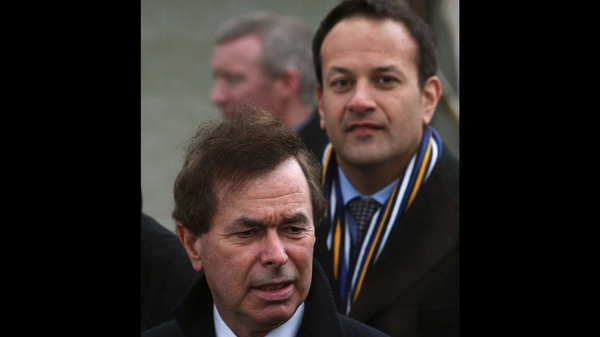