Sinn Féin's Pearse Doherty has named Garda Keith Harrison as the latest whistleblower, during a Dáil debate on the Guerin Report.

The Guerin Report was critical of how allegations made by garda whistleblower Sergeant Maurice McCabe were handled by gardaí, former minister for justice Alan Shatter and the Department of Justice.

This afternoon the Dáil heard claims that whistleblower Garda Harrison was victimised after arresting a colleague who had been drink-driving.

Mr Doherty said that over a month ago he was contacted by a serving gardaí, who articulated serious concerns about practices in the Westmeath district.

Garda Harrison said that after arresting a member of the drugs unit for drink-driving, he was targeted.

He was office bound for a period of two years, while the officer he arrested with a high-level of alcohol in his system was still allowed access to garda cars and to hold a firearm.

The Sinn Féin TD said that on Monday he met Garda Harrison and another whistleblower Nicky Keogh along with John Wilson.

At that meeting, he said, sworn affidavits were handed over, including one expressing concerns about a member of a garda drugs unit.

Mr Doherty said that it was not for him to investigate the claims, but he could ask for assurance that there would be no backlash against the men.

He said that he had confidence in the gardaí, but where there is wrong it must be rooted out and whistleblowers protected.

Mr Doherty said that Garda Harrison's sworn affidavit said that he had been totally undermined and destroyed; his good name and that of his family has been tarnished as a result of his actions.

Mr Doherty said that if there are lessons to be learned in the Guerin Report, it must be to ensure that garda complainants who come forward are listened to and protected.

He added: "Garda Harrison makes serious claims about how the drunk-driving case was struck out of court on dubious rulings and how evidence relating to the case was stolen by a member of the gardaí.

"He also claims that a member of the gardaí, of officer rank stationed in the Westmeath division, prevented successful prosecution of individuals in a number of cases."

He said a civilian had also come forward in recent days, who corroborates claims that have been made by Garda Nicky Kehoe in relation to heroin dealing and a member of gardaí.

She said it raises serious questions about gardaí, the role of the Garda Síochána Ombudsman Commission and the department.

Ms Fitzgerald told the Dáil that all of the findings required further investigation.

She said this must be done under the Commission of Investigation and that wider implications must be tackled through significant reform.

Minister Fitzgerald said that the establishment of an independent garda authority was one of the most significant changes to have happened in the history of the force.

He said the findings of the report were embarrassing for Mr Shatter.

Mr Collins said the inactivity and defiance of Mr Shatter compounded the problems.

He welcomed the Commission of Investigation and said reform should start immediately.

Independent TD Mick Wallace said it was good that the Guerin Report had called a spade a spade.

Since the report was published, he said, "our offices" have been flooded with hundreds of calls.

He said he did not know how they would all be dealt with and they involved some very sad cases.

Meanwhile, the Oireachtas Justice Committee has said it will question the Secretary General of the Department of Justice on matters of policy and administration, with a particular focus on the Guerin Report.

The statement from the committee indicates it is acceding to the request from Brian Purcell not to be questioned about the circumstances surrounding the departure of former garda commissioner Martin Callinan.

The committee is to invite Mr Purcell to appear before it in two weeks.

A review of the performance of the Department of Justice was announced earlier this week following the adverse findings in the Guerin Report. 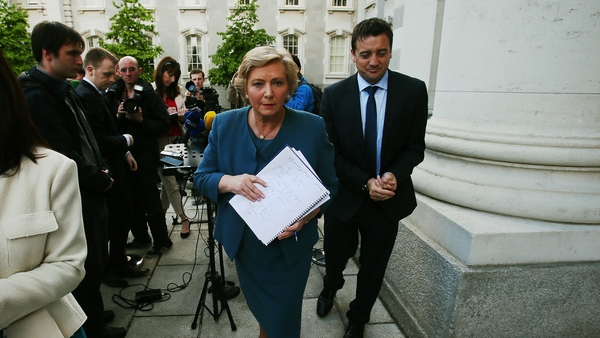