The Irish Nurses and Midwives' Organisation has called for one nurse to every four patients in busy acute wards.

She said that in the case of midwifery, there should be one midwife to 29.5 births.

Ms Mahon said that Ireland should also publicly display staffing in each ward, each day, as is the case by law in the UK.

Nurses also voted to lodge a pay claim in light of the growing economic recovery.

Deputy Secretary General Dave Hughes told delegates said there was a need to restore pay taken away under the Haddington Road Agreement.

The union said that nurses and midwives had endured three pay cuts and were stressed in their professional and personal lives.

Delegates were also told that the Health Service Executive is employing 700 agency nurses and midwives each week to keep the health service running at a cost of €84 million a year.

The conference has passed a motion condemning the recruitment ban and calling for it to be lifted.

The HSE has said that agency nursing staff may only be used where no alternative is possible and where there is a short-term critical service need.

It said that spending on agency staff is closely monitored on a monthly basis.

The HSE said all possible staffing options are considered prior to the use of agency staff.

Minister for Health James Reilly had been due to address the conference tomorrow but he has pulled out because of a throat infection.

The Secretary General of the Department of Health, Ambrose McLoughlin, will address the conference in his place. 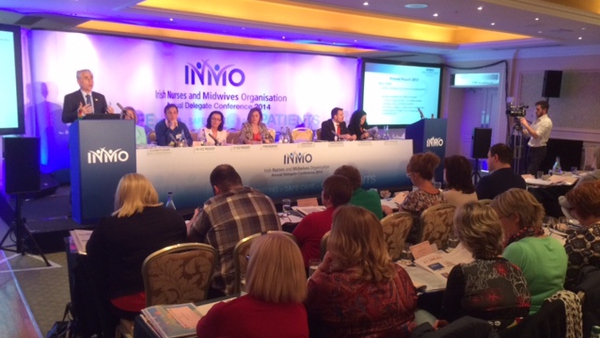