The Director of Public Prosecutions in Northern Ireland has said it could be "many many months" before a decision is made on whether or not Sinn Féin president Gerry Adams will be prosecuted in connection with the abduction and murder of Jean McConville in 1972.

When Mr Adams was released after four days of questioning, the PSNI said a file on the case would be compiled and sent to the DPP for consideration.

This morning, DPP Barra McGrory said the file had not yet been received from the PSNI.

He said he expected it would contain a "voluminous amount of material", including documents from the US.

Mr McGrory said it could be months before his office makes a decision on the file after it is received from the PSNI.

He said it would not be uncommon in major cases for a file to take many months to be considered.

As a former legal advisor to Mr Adams, Mr McGrory is not handling his case at the DPP and it has been given to a deputy director to consider.

Meanwhile, Mr Adams has made a formal complaint to the PSNI about certain aspects of his "interrogation" while he was detained in connection with the murder of Mrs McConville.

Mr Adams was released on Sunday night after four days of questioning by detectives about the murder of the mother-of-ten and other alleged links with the IRA.

He has vehemently rejected allegations made by former republican colleagues that he ordered her abduction and death, and after his release described his arrest as a "sham".

In an article for the Guardian, Mr Adams said that before he was interviewed he was told that there was "new evidential material" and that he was being accused of conspiracy to murder Mrs McConville.

Mr Adams said he was told the police would be outlining a case that he was a member of the IRA, had a senior managerial role within the organisation in Belfast at the time of Mrs McConville's abduction and that he was therefore bound to know about her killing.

He wrote: "Over the following four days it became clear that the objective was to get to the point where they could charge me with IRA membership and thereby link me to the McConville case.

"The membership charge was clearly their principal goal."

Mr Adams said police assertions that he was an IRA member were based on his family background and anonymous newspaper articles from 1971 and 1972, "photographs of Martin McGuinness and me at republican funerals, and books about the period".

He claimed police suggested he had been recruited by police Special Branch and that he became an agent for MI5.

Mr Adams said: "I am innocent of any involvement in the abduction, killing or burial of Mrs McConville, or of IRA membership.

"I have never disassociated myself from the IRA and I never will, but I am not uncritical of IRA actions and particularly the terrible injustice inflicted on Mrs McConville and her family.

"I very much regret what happened to them and their mother and understand the antipathy they feel towards republicans."

He condemned his arrest as an assault on the peace process and said that during his interrogation no new evidential material was produced, or evidence of any kind.

Mr Adams said: "When I was being released I made a formal complaint about aspects of my interrogation. My arrest and the very serious attempt to charge me with IRA membership is damaging to the peace process and the political institutions."

He also criticised the project by Boston College in America in which former IRA members Brendan Hughes and Dolours Price, both now dead, claimed on tape that Mr Adams had a role in ordering the murder of Mrs McConville.

He rejected these allegations, which he said were "now totally discredited", and said the those behind the project were opponents of the Sinn Féin leadership. 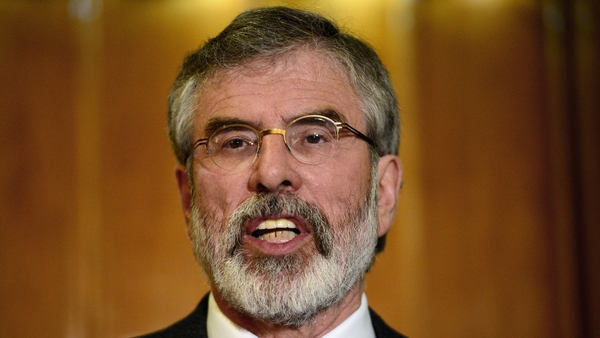