Ukraine's interim president has declared two days of mourning after more than 50 people died yesterday in the country's bloodiest day in months.

"The day of May 2 was a tragic day for Ukraine," Oleksander Turchynov said in a statement.

"I have signed a decree for two days of mourning in Ukraine for the heroes who died in the course of the anti-terrorist operation and also for those who died in the tragic events in Odessa."

The release of the military monitors from the Organisation for Security and Cooperation in Europe resolves a major diplomatic issue for the West.

Moscow said the release showed the "bravery and humanism" of the rebels defending Slaviansk.

Western officials, including US Secretary of State John Kerry and Germany's Foreign Minister Frank-Walter Steinmeier, welcomed the release but said Russia should still do more to help de-escalate the crisis.

Both sides said they agreed that the OSCE should play a bigger role in helping to reduce tension.

The separatists had captured the monitor team on April 25and described them as prisoners of war. One Swede was freed earlier on health grounds while four Germans, a Czech, a Dane and a Pole were still being held until Saturday.

The separatist leader in Slaviansk, self-proclaimed "people's mayor" Vyacheslav Ponomaryov, said they were freed along with five Ukrainian captives, with no conditions.

"As I promised them, we celebrated my birthday yesterday and they left. As I said, they were my guests."

At least nine people, including four servicemen, died in fighting yesterday as the Ukrainian army intensified what Kiev calls an "anti-terrorist" operation around the rebel-held town of Slaviansk.

At least 42 people lost their lives in the southern port city of Odessa after fighting between pro-Russian and pro-Kiev militants climaxed in an inferno that trapped dozens as both sides hurled petrol bombs.

The Kremlin and Ukraine traded accusations over the violence, with Kiev saying the Odessa violence had been "coordinated by sabotage groups from Russia".

Moscow said it was "outraged" as the scenic port city became a new front in an escalating months-long crisis that has sparked fears of a Russian invasion.

The foreign ministry in Moscow called on Ukraine and its "Western backers to end the anarchy and take responsibility", blaming Kiev's "criminal irresponsibility" for the sinister turn of events.

More than 130 people have been detained in Odessa after yesterday's street battles, which resulted in the city's trade union building being set on fire.

Most of those killed either choked on smoke or died after jumping out of the building's windows, officials said.

The victims are believed to have been mainly pro-Russian activists who had been using the building as a headquarters.

Timeline of unrest in east Ukraine

It urged both Ukraine and Russia to restore order.

Authorities in Kiev have admitted the police are "helpless" to contain the pro-Moscow insurgency that has swept through more than a dozen towns and cities in the eastern part of the country.

The Ukrainian government and the West believe that the Kremlin is fomenting the chaos in a bid to destabilise the former Soviet republic ahead of planned elections on 25 May.

Moscow denies the charges and has warned that Kiev faces "catastrophic consequences" if it continues what it sees as a military operation against its own people.

Russia has an estimated 40,000 troops on the Ukrainian border and Kiev has reintroduced conscription and put its armed force on full combat alert, fearing an imminent invasion.

Ukraine's army has broadened a military offensive to retake control of rebel-held towns and cities in the chaotic east of the country, the Ukrainian interior ministry said.

"The active phase of the operation is continuing. We will not stop," said Arsen Avakov on his Facebook page.

"Overnight, forces participating in the anti-terrorist operation in Kramatorsk took control of the TV tower that was previously held by the terrorists," added the minister.

Kramatorsk lies about 17km to the south of the flashpoint town of Slaviansk, where the army mounted a major offensive yesterday. 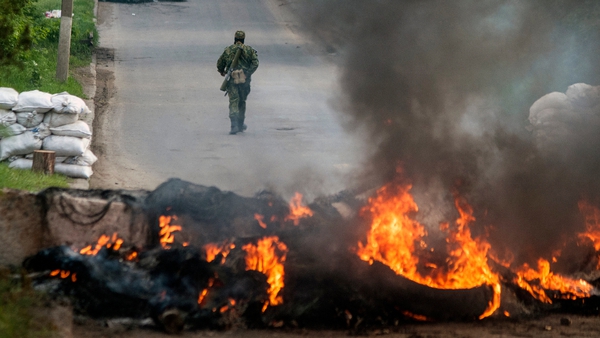