Minister for Transport Leo Varadkar and Minister for Public Expenditure and Reform Brendan Howlin have said they are confident that Fine Gael and Labour will reach agreement on the issue of water charges.

When asked if affordability measures for those on low incomes would mean higher charges for middle income families Minister Howlin said that solving one problem sometimes creates another.

However, he said the Government is committed to keeping charges as low as possible for all and everybody would be paying more for water if Fianna Fáil were still in power.

No decision on water charges by Cabinet at today's meeting. A spokesman said this evening there was a very brief mention of the charges, with contacts between ministers continuing.

A Cabinet source described resolving the issue as a "work in progress".

Negotiations will continue and a special Cabinet meeting may be held if agreement on the issue is reached.

Tánaiste Eamon Gilmore said that the Government parties are continuing their negotiations on the issue.

He said progress is being made but there had not been sufficient progress to make a decision on it.

Taoiseach Enda Kenny earlier said he hoped the details will be finalised and published before the Local and European Elections on 23 May.

The Government is focusing on trying to make the charge as fair and affordable as possible, he said.

The Cabinet also discussed the introduction of water charges two weeks ago, but no decisions were made.

Labour was unhappy with the proposals and the media leaks about them.

The party is said to be holding out for an agreement that a standing charge will not be introduced.

Party sources also say more work has to be done on affordability measures.

Domestic water charges will apply from 1 October, with the first bills being issued in January 2015.

An anti-water charge protester and an Irish Water contract worker were hospitalised for a time following a number of incidents at a housing estate in Cork this morning.

Protesters have been preventing Irish Water contract workers from installing water meters at the Ashbrook Heights estate in Togher in the city for the past eight days.

It is understood that workers arrived at the estate at 6.30am this morning to install meters.

Residents contacted members of an anti-water charge group who also went to the estate.

One of the workers was brought to hospital after an incident developed.

He received what is understood to have been a minor injury to his arm, but he was not detained in hospital.

An ambulance was called for one of the protesters shortly before 11am and he was taken to Cork University Hospital.

He was released from hospital after an assessment.

The man told RTÉ News he received a muscular injury. 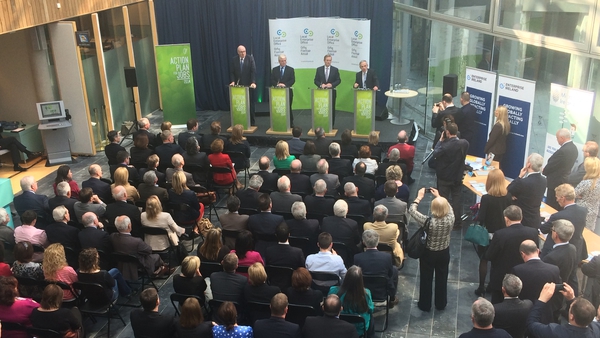