Pope Francis proclaimed his predecessors John XXIII and John Paul II saints this morning in front of hundreds of thousands of pilgrims.

Cheers and applause rang out across St Peter's Square after the double canonisation.

"We declare and define Blessed John XXIII and John Paul II to be saints and we enrol them among the saints, decreeing that they are to be venerated as such by the whole church," Francis said in his formal proclamation in Latin.

The crowd was so large it stretched back along all of Viadella Conciliazione, the half kilometre-long, broad boulevard that starts at the Tiber River.

Even its bridges were packed with pilgrims.

The Mass, which began under a light rain, was also attended by Pope Emeritus Benedict, who last year became the first pontiff in six centuries to step down.

Benedict walked with a cane and was dressed in white vestments

His attendance gave the ceremony a somewhat surreal atmosphere created by the presence of reigning pope, a retired pope and two dead popes buried in the basilica behind the altar.

John XXIII, who reigned from 1958 to 1963 and called the modernising Second Vatican Council, and John Paul II, the Pole who reigned for nearly 27 years, played a leading role on the world stage.

Check out our gallery of images from the Vatican

The overwhelming majority in the crowd were Poles who had travelled from their home country and immigrant communities as far afield as Chicago and Sydney to watch their most famous native son become a saint.

Hundreds of red and white Polish flags filled the square and the streets surrounding the Vatican, which were strewn with sleeping bags, backpacks and folding chairs.

It was one of the biggest crowds since John Paul's beatification in 2011.

Families and other pilgrims had waited for more than 12 hours along the main street leading to the Vatican before police opened up the square at 5.30am.

Some people said they had managed to sleep on their feet because the crowd was so thick.

About 850 cardinals and bishops were celebrating the mass with the pope and 700 priests were on hand to distribute communion to the huge crowd.

Francis' own huge popularity has added extra appeal to the unprecedented ceremony to raise two former leaders of the church to sainthood on the same day.

But while both were widely revered, there has also been criticism that John Paul II, who only died nine years ago, has been canonised too quickly.

Groups representing victims of sexual abuse by Catholic priests also say he did not do enough to root out a scandal that emerged towards the end of his pontificate and which has hung over the church ever since.

About 10,000 police and security personnel and special paramedic teams were deployed and large areas of Rome were closed to traffic.

Pilgrims who did not want to battle the crowd spent the night praying in Rome churches left open especially for the event and would watch the event on large television screens around the city.

The election of the Argentinian-born Pope Francis has injected fresh enthusiasm into a church beset by sexual and financial scandals during the papacy of his predecessor Benedict XVI, who last year became the first pope to resign in 600 years.

Read a blog by Joe Little, RTÉ's Religious & Social Affairs Correspondent, who is in the Vatican for the double canonisation. 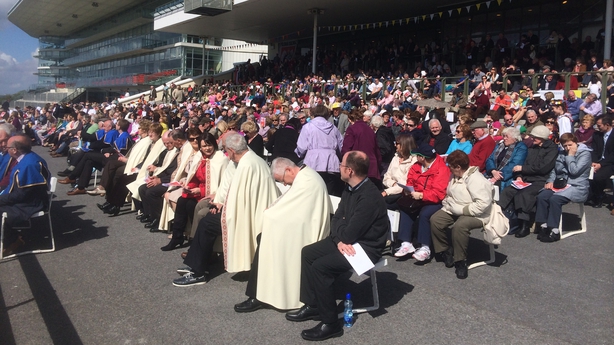 Around 3,000 people gathered at Galway Racecourse this morning for a special event to celebrate the canonisations.

There was a strong turnout from members of the Polish community in the west of Ireland as well as many of those who saw John Paul II in Ballybrit during his 1979 visit to Ireland.

Proceedings began at 11am, when highlights of that visit were shown on a big screen.

Those in attendance then watched edited highlights of this morning's canonisation ceremony in Rome.

A Mass of thanksgiving was then celebrated at the racecourse.

The Bishop of Galway, Martin Drennan, was joined by several other western bishops as well as many priests from the diocese.

Over 2,000 people  attended a special mass of thanksgiving in Knock to mark the dual canonisation.

The Papal Nuncio to Ireland, Charles Brown, was the chief celebrant at the Basilica at the Co Mayo Shrine this afternoon.

He was joined by local clergy who concelebrated the mass.

Hundreds gathered in St Eugene's Cathedral in Derry this afternoon for a special mass to celebrate the canonisation.

A special display had been arranged at the altar with photos, newspaper cuttings, and articles relating to both former popes and two large posters were hung either side of the altar.

A group of young people representing each one of the dioceses’ 51 parishes brought cards to the altar.

Music was provided by the girls’ choir from St Marys College and from the Long Tower Folk Group.

Bishop McKeown said that both new saints were not perfect people but had displayed heroic characteristics in face of adversity in their lives. They were deeply holy men he said.

At the end of mass young people from the diocese taking part in the Pope John Paul II Awards handed out wristbands to children and teenagers in the congregation.

The wristbands were inscribed with John Paul II's message from his visit to Ireland in 1979: "I believe in youth". 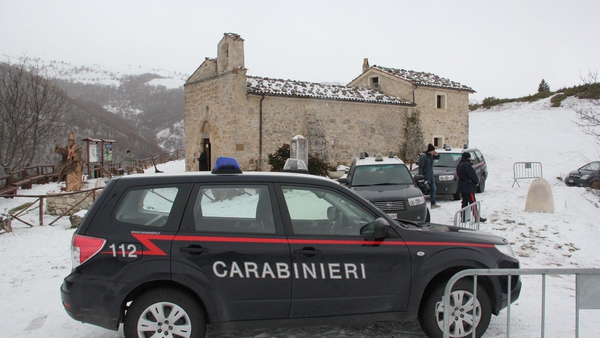