The undersea search for missing Malaysia Airlines Flight MH370 is to be extended beyond the small area identified as its most likely resting place as the quest for any sign of the missing plane enters its 50th day.

A US defence official said the sea search is likely to drag on for years as it enters the much more difficult phase of scouring broader areas of the ocean.

Speaking under condition of anonymity because he was not authorised to comment on the search effort, the official said Malaysia would have to decide how to proceed with the search.

He said it must decide whether to bring in more underwater drones.

The submarine drone Bluefin 21 has so far searched about 95% of a 10 square km area of the Indian Ocean seabed, pinpointed after the detection of acoustic pings believed to be from the plane's black box flight recorders.

Bluefin 21 had to abort the search yesterday and resurface due to a software malfunction.

Technicians fixed the drone overnight and its 14th 16-hour trip to the sea floor at depths of more than 4.5km got under way this morning.

"If no contacts of interest are made, Bluefin-21 will continue to examine the areas adjacent to the 10km radius," Australia's Joint Agency Co-ordination Centre in charge of the search said in a statement.

Flight MH370 disappeared without a trace on 8 March flying from Kuala Lumpur to Beijing with 239 people on board.

The search for MH370 is the longest and most expensive in aviation history, with ships and aircraft from two dozen nations taking part.

The air and sea search continued this morning with up to eight military aircraft and 11 ships.

The Australian and Malaysian governments are under pressure to show what lengths they are prepared to go to in order to give closure to the grieving families of those on board flight MH370.

Malaysia is also under growing pressure to improve its disclosure about its investigation.

Prime Minister Najib Razak told CNN on Thursday his government would make public a preliminary report into the plane's disappearance next week. 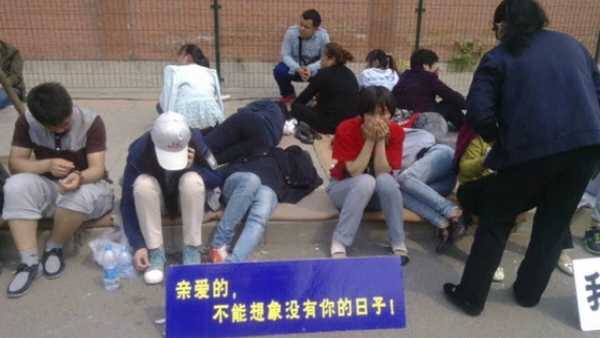