A mini-submersible has completed its first full scan of the seabed in the remote Indian Ocean as part of the search operation for the missing Malaysian Airlines plane.

The massive air and surface search for Flight MH370 is becoming less likely to yield results.

The plane disappeared from radar screens on 8 March with 239 people on board.

Footage from the US Navy deep-sea drone is fast becoming the most important tool for a multinational team still searching for the plane.

A sample taken from an oil slick in the same area, 1,240 miles west of the Australian city of Perth, is also being analysed.

Authorities believe that is the most likely area where the missing plane hit the ocean after disappearing.

A series of "pings" recorded earlier this month have led searchers to the remote stretch of ocean in the belief that the signals may have come from the plane's black box recorders.

However, with no pings received in more than a week and the black box's battery now ten days past its approximate expiry date, authorities are relying on the drone.

The "Bluefin-21" drone completed its first full 16-hour deployment at a depth of 4.5km late yesterday after a series of technical problems cut short the first two attempts.

"Bluefin-21 has searched approximately 90 square kilometres to date and the data from its latest mission is being analysed," the Joint Agency Coordination Centre, the body running the search, said in a statement.

On Monday, the search coordinator, retired Air Chief Marshal Angus Houston, said the air and surface search for debris would likely end in three days as the operation shifted its focus to the largely unmapped area of ocean floor.

However, authorities said today that up to ten military aircraft, two civil aircraft and 11 ships would still search the area.

That would suggest searchers, under pressure from the families of those on board the plane, still hold some hope of finding floating wreckage. 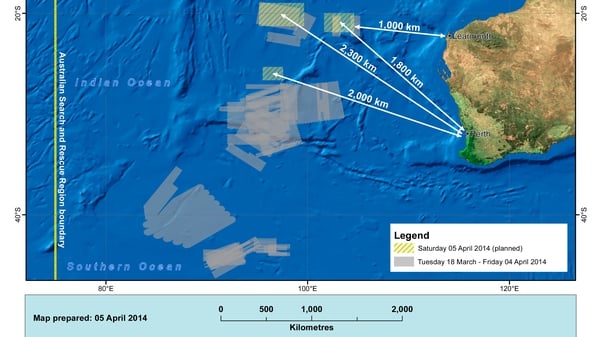