Chinese state news has reported that a patrol ship has detected a "pulse signal" in the MH370 search zone in the Indian Ocean.

However, there has been no confirmation that it came from the missing Malaysia Airlines plane.

The signal had a frequency of 37.5kHz per second, which is similar to the beacon signal emitted by flight recorders.

A black box detector deployed by the Chinese search ship Haixun 01 picked up the signal at about 25 degrees south latitude and 101 degrees east longitude, the official Xinhua news agency said.

The major search for the Boeing 777, which went missing on 8 March, is now in its fifth week.

China's Ilyushin IL-76, a US Navy P8 Poseidon and an Royal Australian Air Force Wedgetail aircraft were joined by eight other military planes, four civilian aircraft and 11 ships in the search today.

It focused on an inhospitable 84,000 sq.m swathe of the southern Indian Ocean about 1,050 miles west of the Australian city of Perth.

Time is running out as the plane's black box may run out of battery to send signals indicating its location by Monday.

Sonar equipment on two other ships may help find the voice and data recorders that are key to unlocking what happened on the flight.

A Towed Pinger Locator is being pulled behind navy ship HMAS Ocean Shield, which is searching a converging course on a 150-mile track with British ship HMS Echo.

The missing airliner lost communications and disappeared from civilian radar less than an hour into an overnight flight from Kuala Lumpur to Beijing.

It was briefly picked up on military radar on the other side of Malaysia. 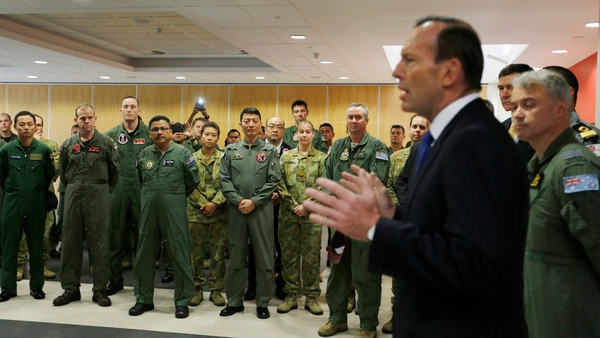