Commissioner O'Sullivan told delegates at the Association of Garda Sergeants and Inspectors annual conference in Co Kerry that their input will make the force a better organisation.

She also said that internal criticism enables gardaí to deal with small issues before they become major grievances.

Ms O'Sullivan said that there must be a clear path for dealing with complaints in an open and transparent fashion.

The recent controversies have opened up new opportunities and possibilities, she said, adding that gardaí still have the support and trust of the Irish people.

Earlier, the AGSI said it did not want GSOC to be the confidential recipient for garda whistleblowers.

It said that it would not be appropriate for gardaí to be confiding in GSOC, which is the body tasked with investigating its members.

Delegates at the conference agreed that the charter for whistleblowers in the force must now be made more robust.

The show of hands was unanimous as garda sergeants and inspectors voted for the whistleblowers charter to be revised and made more robust.

The delegates believe that there needs to be a process whereby gardaí can report malpractice in confidence.

They would not comment on the actions of former garda John Wilson and Sergeant Maurice McCabe, but they did acknowledge that the reason they did what they did was because there was not a proper system in place.

The conference was told that the whistleblower controversy has damaged the reputation of the Garda Síochána more than anything else in the history of the force.

However, whatever system is to be put in place, the sergeants and inspectors said they do not want GSOC involved.

Govt accused of 'policing on the cheap'

Earlier, the AGSI accused the Government of trying to provide "policing on the cheap" because it has not allocated any funding for new recruits.

For the first time in five years, 300 new gardaí are due to begin training at the Garda College in Templemore this summer.

While the recruitment has been welcomed by the AGSI, it has claimed no funding has been earmarked to train the new recruits and there is no budget for new staff or new equipment.

The AGSI suspects the money will come from within the current garda budget, which it says will mean a cut to frontline services.

It has called for a supplementary budget to be put in place to pay for the recruitment.

The association has also accused the Government of spending millions on buying land in Co Tipperary for a new tactical training centre that has never been built.

It has said €5m has been wasted on buying the house and land and said the house in Dromod has rotted and is currently condemned.

It also said investment in garda buildings has fallen dramatically and describes the divisional headquarters in Tralee as "a disgrace". 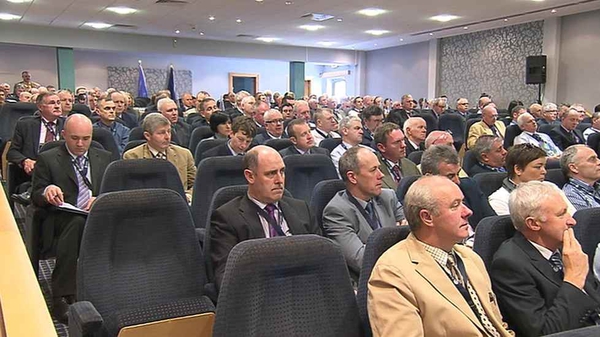 AGSI conference hears garda morale 'on the floor' after controversies