"Units of the interior and defence ministries are implementing an operational response plan," he said in a statement on his Facebook page.

Meanwhile, the regional police chief of the east Ukrainian city of Donetsk has said he was quitting his post, bowing to demands from pro-Russian protesters.

Above the police headquarters, the Ukrainian flag was no longer flying, and was replaced with a separatist flag, according to a witness.

Earlier, Ukraine's foreign minister urged Russia to end what he called "provocative actions" by its agents in eastern Ukraine after pro-Russian militants seized two buildings in the city of Slaviansk.

Local police said hundreds of weapons had been seized during the takeover of the police station.

"The aim of the takeover was the guns," a police statement issued from the capital Kiev said.

"They are giving these guns to participants in the protest in Slaviansk."

Russia denies providing any support to the militants, who have seized four government buildings in the east of the former Soviet republic, apparently emboldened by Russia's annexation of Ukraine's Crimea region last month.

Mr Avakovhas said in an earlier Facebook post that "armed men in camouflage uniforms seized the police department in Slaviansk.

"The response will be very tough because there is a difference between protesters and terrorists."

It is the latest public building to be taken over in the east as Pro-Russian protesters stand off against Kiev.

Slaviansk is in Ukraine's Donetsk region, about 150km from the border with Russia.

Pro-Russian protesters have also taken over the building of the state security service (SBU) in Slaviansk.

Around 200 pro-Russian protesters armed with clubs and sticks have stormed the police headquarters in Donetsk this morning.

The protesters met no resistance, and a bus filled with a few dozen anti-riot police who quickly arrived at the scene were seen sporting orange and black ribbons symbolising support for Russian rule.

Government buildings in Donetsk and Luhansk have been occupied by pro-Russian protesters for several days.

Yesterday, a deadline set by the Kiev authorities for the protesters to end their occupation expired, but there was no sign of action from the Ukrainian police to force them out.

"I will say it again: those who want dialogue... will have dialogue and the search for solutions. Those who are up in arms, set fire to buildings, shoot at people, police, terrorise with bats and masks, these people will face an appropriate response," Mr Avakov said in his Facebook post.

Russia has raised the price it charges Kiev for gas and said it owes Moscow $2.2bn in unpaid bills. It also says Kiev had failed to pay its bill on time.

Russian gas giant Gazprom earlier this month increased gas price for Ukrainian consumers to $485 (€349) per 1,000 cubic meters (tcm) from $268 (€192) for the first quarter, saying Kiev was no longer eligible for previous discounts.

"The question of repayment of debt is directly linked to the maintenance of gas prices at the level of the first quarter," Mr Kobolev told the Zerkalo Nedely weekly in an interview, referring to the original price of $268 per tcm.

"We see no reason to revise the price. We consider the price at around $500 as non-market, unjustified and unacceptable. Accordingly, we have suspended payments for the period of the price negotiations."

Kiev gets about half of its gas from Moscow and a large proportion of Europe's gas is pumped from Russia via Ukraine. 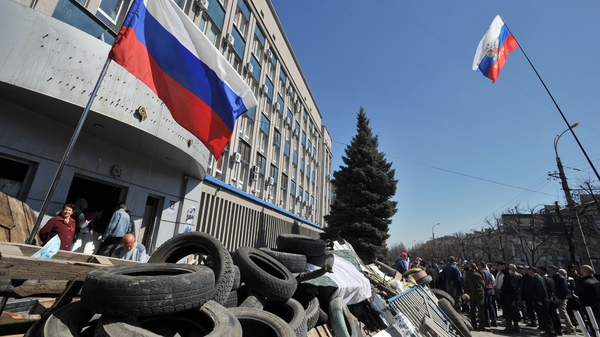