After negotiations overnight, 51 people left the building without weapons, said SBU officials in the Ukrainian capital Kiev. It was unclear if they were protesters or hostages.

Interfax Ukraine news agency later put this number at 56 and said negotiations were continuing between the protesters and local officials to end the occupation.

The activists denied yesterday they had any explosives or were holding hostages. But they conceded they had seized an armoury full of automatic rifles.

The Luhansk building was one of several seized by protesters in the east of the country demanding regional referendums on independence from Kiev.

Protesters in Donetsk, to the south, remain in control of the main regional authority building, but authorities ended the occupation in the city of Kharkiv.

The Ukrainian government says the occupations are part of a Russian-led plan to dismember the country.

US Secretary of State John Kerry has accused Russian agents and special forces of stirring separatist unrest and said Moscow could be trying to prepare for military action as it had in Crimea, annexed by Russia last month.

Meanwhile, senior officials from the EU, Russia, the US and Ukraine are to meet next week to discuss the worsening situation in Ukraine.

It will be the first four-way meeting since the crisis erupted. 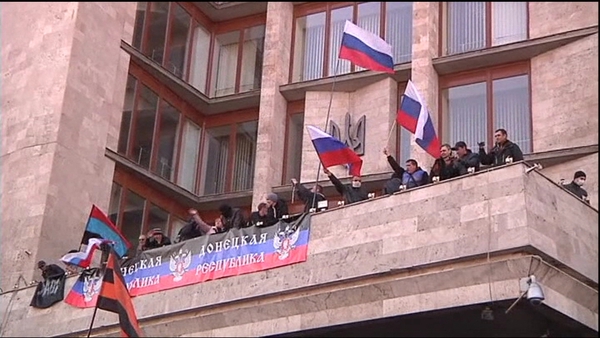