The United Nations Security Council is expected to authorise deployment of about 12,000 peacekeepers to the Central African Republic in order to help end the violence.

An initial contingent of 55 EU troops made their first patrols in the capital, Bangui.

At least 30 people were killed on Tuesday in the latest clashes between mainly Christian militia and minority Muslim fighters in the central town of Dekoa.

A coup in March last year by the Muslim Seleka rebels plunged the Central African Republic into chaos.

After seizing power, some of the rebels went rogue and embarked on a campaign of killing, raping and looting.

The abuses prompted members of the Christian majority to form vigilantes called "anti-balaka," or anti-machete in the local Sango language, unleashing a wave of brutal tit-for-tat killings in the former French colony.

Tuesday's violence pitted the two sides, with the "anti-balaka" attacking Seleka positions early in the morning in the town about 300km north of Bangui, police said.

"Most of the victims were civilians who were hit by stray bullets," a police source said, adding that the fighting lasted more than four hours.

About 8,000 French and African peacekeepers have been struggling to stem the bloodshed, which the UN warns could become genocide.

The European Union said last week it would send around 800 troops - its first major ground operation in six years. They are expected to be fully operational by the end of May.

The United Nations force, comprising 10,000 soldiers and 1,800 police officers, is expected to begin operations in mid-September, although the international body may provide logistical assistance sooner.

UN Secretary General Ban Ki-moon has warned that the conflict has turned into "ethno-religious cleansing", with lynchings, decapitations and sexual violence going unpunished.

On Saturday the UN chief told politicians they had a duty to prevent a recurrence of such atrocities.

According to the United Nations, the proportion of Muslims in the overall population has shrunk from around 15% to 2% since the violence began. 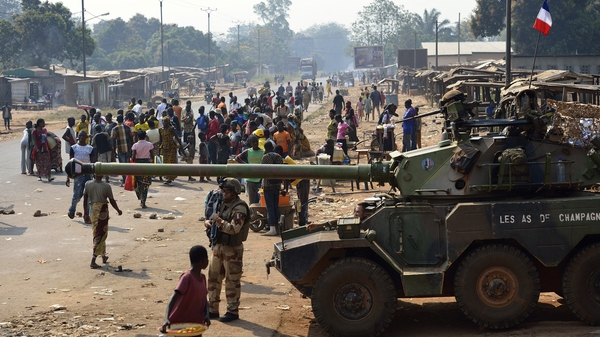 EU ministers expected to agree to send troops to CAR