President Michael D Higgins has hailed his "memorable" historic State visit to the UK as "so positive, so uplifting and so hopeful".

He took to the Royal Albert Hall stage after a concert in his honour and said: "On a night like this it is great to be Irish."

He added it was "even better" to share it with "our friends in Britain".

President Higgins was guest of honour at the concert on the penultimate day of the State visit.

The visit reached a crescendo tonight with 'Ceiliúradh', meaning celebration, an evening of song, dance and spoken word.

The President and his wife, Sabina, were joined by Prince and Princess Michael of Kent for the concert in London. 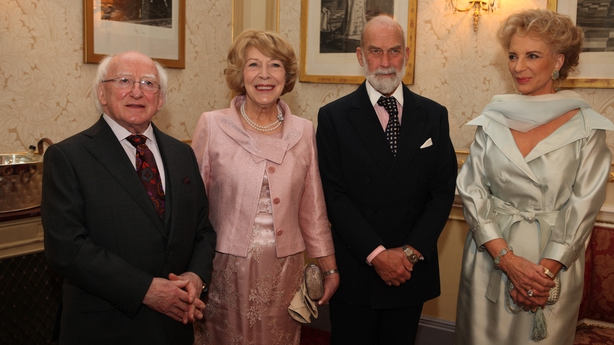 Among the performers were Imelda May, Paul Brady, Glen Hansard and The Gloaming. 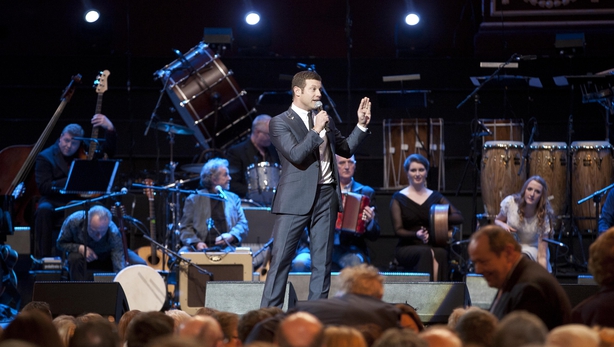 Around half of the 5,000 tickets for the event, priced at £10, sold out in four hours when they went on sale. 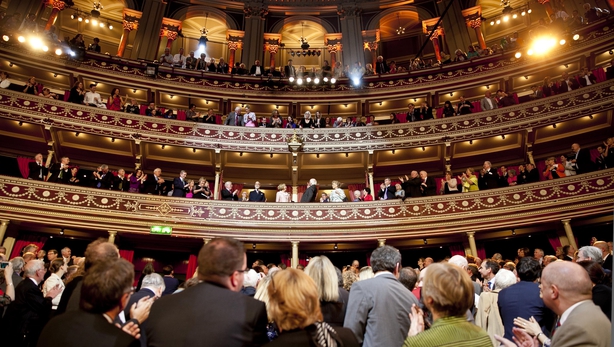 Other attendees were invited guests, including political, business, cultural and Irish community contacts. 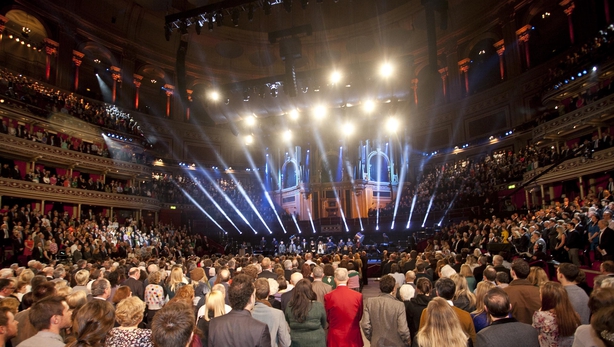 Proceeds from the ticket sales are being donated to the Irish Youth Foundation, to be used in support of Irish cultural projects in Britain.

In his speech, President Higgins thanked the Irish people who had made Britain their home and contributed to its development.

He said that the performances at the concert show "how deeply interwoven are the wider cultures of these islands, and how they have influenced and enriched each other."

Speaking to the diaspora, he said: "You remain a cherished member of the Irish family."

The four-day State visit comes to an end tomorrow.

A small protest was held outside the venue by demonstrators intending to raise awareness of what the group calls the ongoing problem of Ireland Making England the Legal Destination for Abortion (Imelda).

The women are members of 'Speaking of IMELDA' a direct action feminist performance group.

Dressed entirely in red, the group performed a short piece. 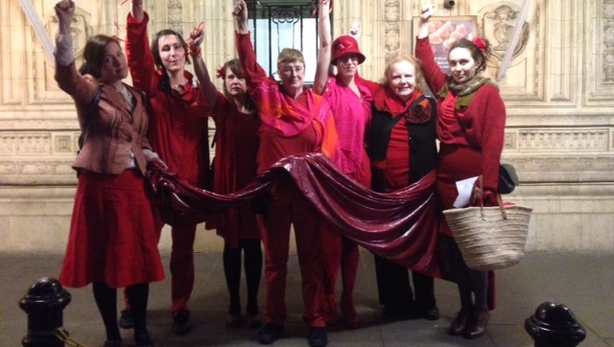 The group says it operates against the shaming and silencing of women who have had abortions.

A spokesperson said they believed the Irish State Visit was a positive thing, but they wanted to insert this issue into the debate.

Earlier, the President was at Windsor Castle for a Northern Ireland-themed reception hosted by Queen Elizabeth II.

Attendees were also expected to include Head of Google in Ireland John Herlihy and Lord Mayor of Belfast Máirtín Ó Muilleoir as well as former Northern Ireland goalkeeper Pat Jennings.

Co-operation Ireland played a central role in suggesting invitees for the event. Its chairman, UK-based businessman Christopher Moran, has a close relationship with the royal household.

This morning, the President and his wife visited the Food Animal Initiative research farm in Wytham, Oxfordshire.

The 1,650-acre farm operates in partnership with Oxford University.

They examined the farm's sustainable food initiatives and Ireland as a green food destination will be promoted.

Bord Bia nominated the farm for the President's visit, in an effort to promote what it says is the Irish agri-food industry's commitment to sustainability.

The UK is the largest export market for Irish food and drink, valued at €4.2bn in 2013, according to CSO and Bord Bia figures. 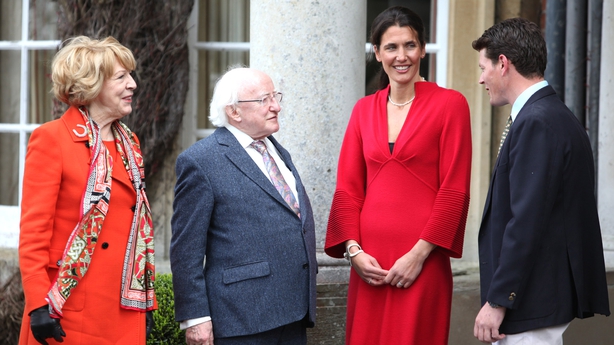 The President and Mrs Higgins this afternoon presented the owners of the Park House Stables, Andrew and Anna Lisa Balding with the Presidential colours; a St Patrick's blue tunic and a yellow sleeve.

They will be worn by the John Oxx-trained Aimhirgin Lass.

It will resume the practice of the National Stud running a horse in the President's colours.

The Presidential party was then brought on a tour of the stable and was shown two of the queen's fillies - Micras and Enliven.

Enliven takes part in a race at Newbury tomorrow.

Andrew Balding, a brother of broadcaster Claire Balding, showed the President and Mrs Higgins a deep water swimming pool for the horses and the group was then transported to the gallops to see the horses in action.

The stable is home to horses belonging to the queen and well-known people such as former Manchester United manager Alex Ferguson.

It was home to the Derby champion Mill Reef in the 1970s.

The visit was undertaken to highlight the importance of the equine industry to Ireland, a €1.1bn industry employing 14,000 people.

He said that Ireland was deeply grateful to Britain for the bilateral support it received in response to the economic crisis.

The President told guests that the human cost of the financial crisis has been enormous.

While unemployment was receding, he said, it remained too high and said emigration was a challenge to Ireland's future prosperity.

He also said the significance of the intertwined histories of Ireland and Britain could be not underestimated.

President and Mrs Higgins have given a number of presents to members of the Royal family during the State visit to the UK.

These include a 'Table size bronze bust of the steeplechaser Arkle, with Pat Taffe in the saddle'; to Queen Elizabeth by Emma McDermott.

To the Duke of Edinburgh: Tree Council of Ireland: Sponsor of a Tree, Certificate of the planting of a Sessile Oak, in silver frame: and a book 'The Heritage Trees of Ireland' and Magee Brown Salt and Pepper tweed x 4 metres suit length.

To Prince Charles: A Fly Fishing Frame; two books: 'Oilean' and 'If Ever You Go'.

To Camilla, Duchess of Cornwall a Foxford Rug in Mayo Tartan, woven in Foxford; and an Irish Handcrafted Glass Vase.

Joint wedding anniversary (this week) gift for Prince Charles and the Duchess of Cornwall; Galway Crystal Decanter and Glass set, with a personal note from the President.

For Mia Tyndall (the Queen's great-granddaughter, Zara Phillips' and Mike Tindall's daughter): 'Stories for Children' by Oscar Wilde with illustrations by Charles Robinson; and 'Irish Legends for Children' retold by Yvonne Carroll.

For Prince George (Prince William's and Catherine, Duchess of Cambridge's son): 'The Happy Prince by Oscar Wilde'.  A special 1920 edition of the children's classic, reset and published by arrangement with David Nutt, with illustrations by Charles Robinson. 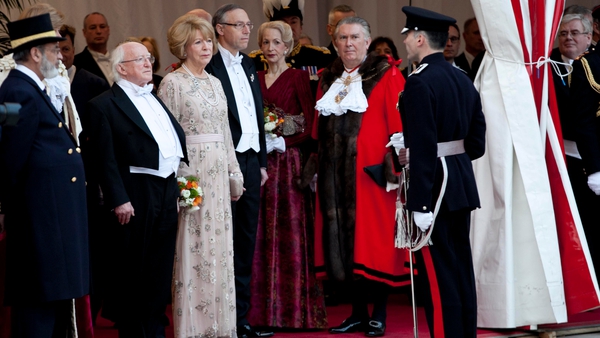 President Higgins thanks Britain for support during crisis