President Michael D Higgins has said that Ireland was deeply grateful to Britain for the bilateral support it received in response to the economic crisis.

He made the comments in a keynote address tonight at a gala dinner at London's Guildhall.

On the second day of his State visit to the United Kingdom, President Higgins told guests that the human cost of the financial crisis has been enormous.

While unemployment was receding, he said, it remained too high and said emigration was a challenge to Ireland’s future prosperity.

He also said the significance of the intertwined histories of Ireland and Britain could be not underestimated.

The President addressed 700 guests at the event, which was hosted by the Lord Mayor of the City of London, Fiona Woolf.

Earlier, President Higgins said the proximity of Britain and Ireland has sometimes stopped the two from seeing the richness in each other.

He was speaking as he attended an official lunch in his honour hosted in 10 Downing Street by British Prime Minister David Cameron.

Mr Cameron said he was privileged to be in office when relations between the two countries were so warm.

It was great that Anglo-Irish relations had been transformed, he said, adding that it was vital that the two stay on, what he called, a "road of reconciliation".

Responding, President Higgins spoke about the opportunities for development in relation to the peace process.

The President was also welcomed to City Hall by Mayor of London Boris Johnson.

Mr Johnson said to the President: "I can't tell you the excitement in my office. I have lots of Irish people and they've all been making freshly baked biscuits, it's unprecedented."

This afternoon, the President and his wife, Sabina, attended a youth workshop titled 'Taking Charge of Change Together'; an event featuring 50 young people from Northern Ireland, the Republic and Britain.

Following that visit, the President moved on to address the Royal Society, where he remembered Robert Boyle.

He said he looked forward to a collaboration between the society and Science Foundation Ireland, the largest funding organisation for scientific innovation in Ireland.

Mrs Higgins undertook a number of personal engagements in London this afternoon, as part of the State visit.

It included a tour of the Royal Academy where some world famous actors have graduated from, and she also hosted a special lunch for Irish fashion designers.

This morning, the President and his wife viewed the Colours of five Irish regiments of the British Army that were disbanded following the establishment of the Irish Free State in 1922.

They were accompanied by the Duke of York, Prince Andrew and the Duke of Edinburgh, Prince Philip.

The Colours are on display at St George's Hall in Windsor Castle where they were installed during a ceremony led by King George V in 1922. They have remained there since.

The British regiments that recruited in Ireland were disbanded after 1922.

This morning's event lasted 30 minutes and was also attended by the Tánaiste and his wife, Carol Hanney.

Earlier, Taoiseach Enda Kenny said the two State visits have established an unprecedented level of co-operation and trust between Britain and Ireland.

Speaking at a business breakfast in London, Mr Kenny described the visit of President Higgins as "momentous".

He also highlighted Queen Elizabeth's comments last night, when she said British society was the richer because of the involvement of the Irish community.

Mr Kenny welcomed the Queen's endorsement of the suggestion that a member of the British Royal family might attend some of Ireland's independence commemorations.

He said these events had to be handled sensitively but he would welcome any royal involvement.

He also said he would like to see the Queen pay another visit to Ireland but that was a decision for the British authorities.

Mr Kenny said he had discussed with Mr Cameron the possibility of a joint trade mission at prime ministerial and Taoiseach level, which he said would present a brilliant opportunity for both countries.

Last night, the Taoiseach and Mr Cameron were among the 160 guests at the State banquet in Windsor Castle. 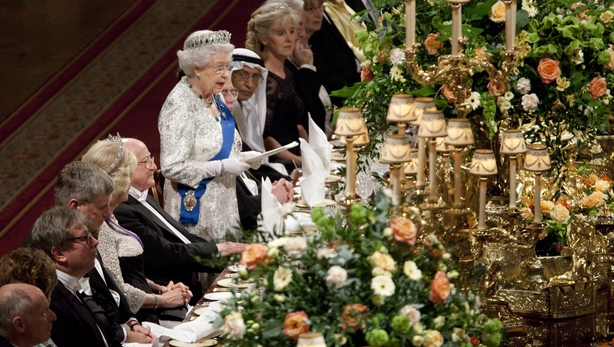 President Higgins and Queen Elizabeth spoke of the new warmth in British-Irish relations during the event.

The Queen committed her family and government to standing alongside the Irish administration throughout the anniversaries of World War I and the events that led to the creation of the Irish Free State.

The Queen spoke of times when many Irish migrants to Britain encountered discrimination and a lack of appreciation.

She said the goal of modern British-Irish relations is that we should live together as neighbours and friends.

President Higgins drew upon the Irish phrase "ar scáth a chéile a mhaireann" - we live in the shadow of each other.

He noted how "scáth" can translate as shelter as well as shadow.

He tracked the changes in the British-Irish relationship and said the shadow of the past has become the shelter of the present.

He also spoke of the Queen's visit to Ireland three years ago and said this return State visit completes a circle.

In referring to those who lost their lives during the Troubles, he said building peace is the only restitution, the only enduring justice we can offer them. 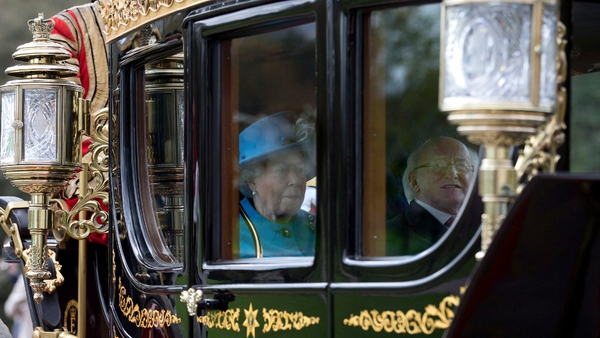 Marking a Milestone: Reporting on the first Irish State visit to the UK