The banquet will be held at Windsor Castle next week during a four-day State visit to Britain by President Michael D Higgins.

Mr McGuinness refused to attend a gala banquet in honour of Queen Elizabeth at Dublin Castle in 2011.

However, they did shake hands at an event in the Lyric Theatre in Belfast two years ago.

Speaking on RTÉ's This Week programme, Mr McGuinness said he is attending the event as a representative of the people of Northern Ireland and in the context of conflict resolution and reconciliation.

He said his presence alongside First Minister Peter Robinson will bring an all-Ireland dimension to "an historic event".

Mr McGuinness said to his knowledge he was issued with a joint invitation from both Queen Elizabeth and President Higgins.

He was also asked about the reaction to the decision from members of Sinn Féin.

He said there was some opposition from a minority within the party, but a democratic decision was taken by the Sinn Féin Officer Board.

In a separate statement this afternoon, Mr McGuinness said: "There have been huge and positive political changes in recent years.

"There is now a clear process of transition ongoing within the island of Ireland and between Ireland, including the North, and Britain.

"I firmly believe that my attendance marks another significant step. It is not an end to the process of building a new relationship based upon equality but is important part of that journey."

Mr Kenny said it will bring the relationship between Ireland and Britain to an unprecedented level.

It is the first time an Irish Head of State has been formally invited to the UK by a British monarch.

In an interview on the BBC's The Andrew Marr Show, Mr Kenny said the visit is about building relations.

He said: "Symbolically, it's of enormous importance, but also practically, in that it brings the relationship between the two countries and the two peoples to an unprecedented level.

"This was unthinkable 20 years ago and it's happening next week.

"So, it's of enormous significance ... for the efforts her Majesty made when she came here on her royal visit and on the participation and, indeed, excitement of the Irish people living throughout Britain."

The Taoiseach also said he did not see why Mr McGuinness should not attend the Windsor Castle banquet.

He said: "This is all part of the building of relationships between the two countries and peoples on both side of a divide.

"He's an elected member of the executive services - Deputy First Minister. We've got to move on and not be blocked by the past."

On the issue of the 1916 centenary, the Taoiseach said it should be possible for members of the British royal family to visit Dublin during the commemorations.

He said it would be another event in the continuing closeness between both countries.

Meanwhile, Tánaiste and Minister for Foreign Affairs Eamon Gilmore has said relations between Ireland and Britain are better than they have ever been.

Speaking on Sky News this morning, Mr Gilmore said there was an enormous volume of trade between the two countries, amounting to about €1bn every week. 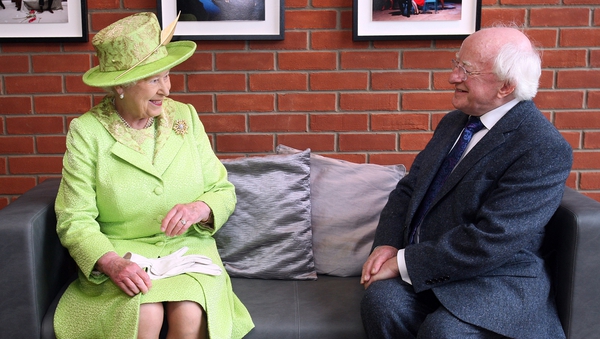