The no confidence motion in the Minister for Justice Alan Shatter has been defeated in the Dáil this evening.

After two nights of debate, the motion was defeated by 95 votes to 51.

The Opposition has been calling on the minister to step down over his handling of the garda taping controversy.

The Minister for Finance Micheal Noonan accused the Opposition of not only playing the man but trying to get the star player off the pitch.

However, the contribution from the Opposition was very different.

Independent TD Mick Wallace said Minister Shatter was a “joke who had presided over one sham after another”.

While Independent TD Clare Daly branded his handling of the Ian Bailey case a “disgrace”.

Fianna Fáil TDs repeatedly queried the events which led to the decision of the garda commissioner to stand down.

Party leader Micheál Martin said that the inescapable conclusion was the former commissioner had been “scapegoated” to save Minister Shatter.

Meanwhile, as the controversy over whether Mr Shatter or the Taoiseach knew of a two-week old letter from former garda commissioner Martin Callinan setting out his position on the garda taping continues, a Government spokesman defended Enda Kenny's actions.

The spokesman said that the Taoiseach clearly felt that the information already in his possession, after briefings from the Attorney General and the Department of Justice, was of such gravity that it justified his decision to tell the then commissioner of his unease.

Fianna Fáil had said that it was not credible that Mr Kenny took the decision to send an official to the commissioner’s home last week without having seen the letter from Mr Callinan.

The letter, written by former commissioner Callinan, was received by the department on 10 March and was addressed to the secretary general.

In it, Mr Callinan tells the department about the recordings of phone calls at garda stations.

He also says he consulted the Attorney General's Office on the issue on 11 November 2013.

Last night, Secretary General of the Department of Justice published a six-page report in which he explained the matters raised in Mr Callinan's letter.

He also confirmed that Mr Shatter was not briefed on the matter until the evening of Monday 24 March.

That was the day Mr Purcell returned to work after being away from the office since 15 March.

The Oireachtas Justice Committee has deferred for a week any decision on whether or not to call the former garda commissioner and senior officials from the Department of Justice to question them about the garda taping controversy.

The committee met today to decide on whether or not to call Mr Purcell, Mr Callinan and Minister Shatter to appear before them.

However, the committee has decided to wait a week until the terms of reference for the commission of investigation are published, before deciding whether to call witnesses before them.

It also decided to write to the Government to ensure that the recordings in garda stations, the management of correspondence in the Department of Justice are included in the terms of reference.

The committee also wants the circumstances surrounding the departure of former garda commissioner Martin Callinan in the terms of reference.

Earlier, Mr Kenny told the Dáil that an item was delivered to Minister Shatter's house in Dublin containing anti-Semitic material and a "substance".

He said an "item in the post contained anti-Semitic material and a substance, which (when) analysed was harmless".

Mr Kenny said this was a new low and that similar material has also been received in the Department of Justice in recent days.

Gardaí confirmed an investigation is under way following an incident at the housing estate where Mr Shatter lives.

Gardaí and the Army Bomb Disposal unit were called to the estate in Ballinteer shortly before 10am. 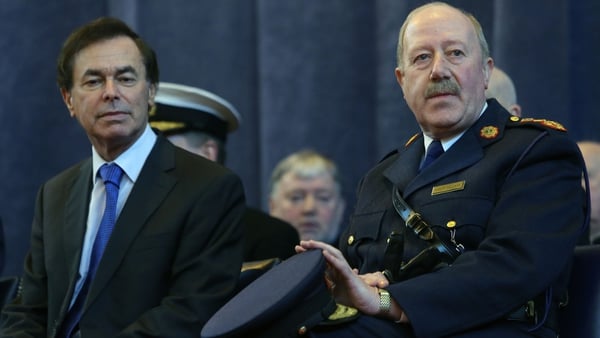