Gunmen shot dead six army officers near Cairo this morning, the second attack on Egyptian security forces in three days that the military has blamed on the outlawed Muslim Brotherhood of deposed President Mohammed Mursi.

Egypt has been hit by an Islamist insurgency that has mainly targeted the police and army since the military overthrew Mr Mursi in July.

About 300 security officers have been killed in the wave of violence.

Today’s attack on a military police checkpoint was carried out by unidentified gunmen who then fled, according to state media.

A senior security source told state TV that two bombs found near the checkpoint had been defused.

The army released a statement shortly after, blaming the Brotherhood, but the movement's leader Amr Darrag denied the accusation.

"I condemn the killing of Egyptian soldiers. How can the Muslim Brotherhood be accused a few minutes after the attack with no evidence or investigation," he said on Twitter.

The military-backed government condemned the attack and said it was determined to combat militant attacks.

Analysts expect attacks on security forces to increase in the coming months when a presidential vote is due to take place which is widely expected to be won by army chief Field Marshal Abdel Fattah al-Sisi.

Sinai-based militant group Ansar Bayt al-Maqdis has claimed responsibility for a series of high-profile attacks on senior security officials, including an assassination attempt on the interior minister last year.

The checkpoint raid this morning came two days after an officer was killed in an attack on an army bus which the military also blamed on the Brotherhood.

The Brotherhood, which says it is committed to peaceful activism, condemned that attack and accused the government of trying to implicate it for political reasons.

The interim government declared the Brotherhood a terrorist group in December and a security crackdown has devastated the movement, driving Egypt's most organised political organisation underground.

Mr Mursi, other Brotherhood leaders and hundreds of Islamist activists have been jailed pending trial over violence-related crimes.

The army said last Wednesday that security forces had recently killed seven militants and arrested 36 others, all linked to the Brotherhood and suspected to be involved in attacks against security forces since Mr Mursi was toppled.

The Brotherhood has denied any links to such attacks. 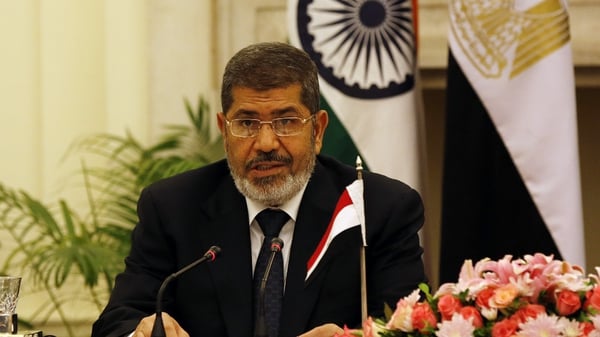