Taoiseach Enda Kenny has begun his St Patrick's Day visit to the United States with an address to the US Chamber of Commerce in Washington DC.

Delivering a speech this morning, Mr Kenny stressed that Ireland was not a tax haven.

He said he was aware that the Irish corporate tax rate had been the source of much political discussion on Capitol Hill, but said that Ireland did not meet any of the four criteria for tax haven status.

Mr Kenny said the 12.5% tax rate would be staying and had brought Ireland many benefits.

He said Ireland had removed the "stateless concept" in the last Budget because of the damage it was causing to its reputation.

The Taoiseach also encouraged any US business person to call him directly if they had a problem, a question or a suggestion, saying his number was publicly listed and he welcomed all calls.

He impressed upon the gathered guests that Ireland had restored its reputation and its integrity and was very much "open for business".

They discussed a range of issues, including recent political developments in the North.

Mr Kenny will have various meetings with US President Barack Obama and Vice President Joe Biden tomorrow, including the traditional shamrock presentation at the White House.

The Taoiseach will then travel to Boston and New York for several engagements, including meetings with the newly-elected mayors of both cities.

A coalition of LGBT campaigners is calling on Mr Kenny to withdraw from his planned participation in the New York St Patrick's Day Parade, or failing that, to wear a rainbow lapel pin in solidarity with the excluded LGBT community.

LGBT Noise and the National LGBT Federation (NXF) have penned an open letter to the Taoiseach, co-signed by public figures and civil society organisations.

They argue the exclusion of LGBT community groups from the New York parade is not in keeping with modern Irish values and is a manifestation of lingering prejudice which has no place in any celebration of Irish identity today.

Elsewhere, the PSNI will march in the New York parade for the first time.

Six PSNI officers will march alongside members of An Garda Síochána.

The historic move came about after the New York parade organising committee said they would welcome participation from the PSNI.

The PSNI said it is delighted to be sending six officers to take part who will be led by a ranking member.

The six were chosen because of their participation in the World Police and Fire Games held in Belfast last year.

They will march in uniform alongside a few dozen gardaí, in what is being described as a show of mutual respect. 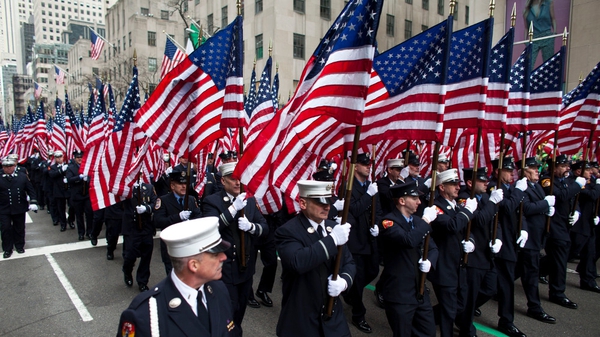