A Sunday Independent/Millward Brown opinion poll suggests that there has been a drop in support for Fine Gael, the Labour Party and Fianna Fáil.

The findings come in the wake of the recent garda controversies.

The poll gives a snapshot into what potential voters were thinking during the period from 19 February until Friday.

The garda whistleblower controversy and also the suspected bugging of the Garda Ombudsman Commission's office all were being discussed at that time.

The poll suggests Fine Gael is down three points to 27%, Labour's support has fallen by four points to 8%, and Fianna Fáil has dropped by five points to 21%.

Polls suggest rise in support for Sinn Féin and independents

Meanwhile, there is big rise in support for Sinn Féin which is up six points to 22%.

Independent and others are also on 22% and they too saw support rise by six points.

This poll brings Fine Gael support back to where it was before the country exited the bailout last November.

Labour's support level is back where it was last summer.

The opinion poll may indicate that recent garda controversies and the Department of Justice's handling of them, could be influencing voters' thinking right now. 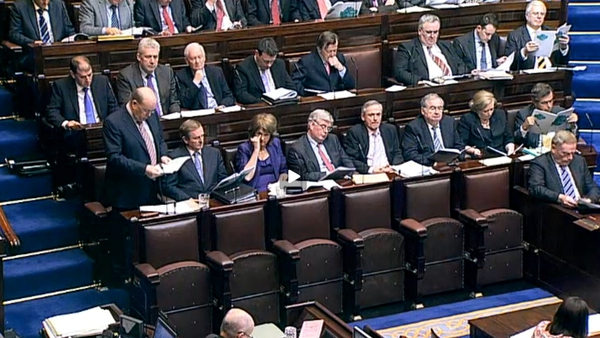