US President Barack Obama has said he is "deeply concerned" about reports of military movements by Russia inside Ukraine.

Speaking at the White House Mr Obama said any violation of Ukraine's sovereignty would be deeply destabilising and he warned there would be costs for any military intervention in Ukraine.

Earlier the US ambassador to the United Nations Samantha Power called for an urgent, international mediation mission to Crimea to de-escalate tensions in the region following an urgent meeting of the UN Security Council.

Ms Power said the mission would facilitate productive and peaceful dialogue among all Ukrainian parties.

It comes as Russian aircraft carrying nearly 2,000 suspected troops have landed at a military air base near the regional capital of the Crimean peninsula, a top Ukrainian official said accusing Moscow of an "armed invasion".

"Thirteen Russian aircraft landed at the airport of Gvardeyskoye (near Simferopol) with 150 people in each one," Sergiy Kunitsyn, the Ukrainian president's special representative in Crimea, told the local ATR television channel.

He said the air space had been closed.

It was not immediately clear if Russia had the right to use the base or send additional troops there under its agreements with Ukraine.

However, Russia's UN Ambassador Vitaly Churkin has said any Russian military movements in Crimea are in keeping with Moscow's existing arrangement with Ukraine on the deployment of military assets in the former Soviet republic.

"We are acting within the framework of that agreement," he told reporters after a closed-door meeting of the UN Security Council.

He did not give any details or comment on specifics of any Russian military deployments on Ukrainian territory.

Kiev's main airport has said flights to the Crimean capital of Simferopol have been cancelled as tensions escalate on the peninsula.

A spokeswoman who did not give her name said flights for this evening and tomorrow morning had been cancelled because "the situation in Simferopol does not allow them to accept flights".

The Simferopol airport website said a flight to and from Istanbul had been also cancelled this evening. It was unclear whether the Crimean air space had been closed altogether.

Armed men took control of two airports in Ukraine's autonomous Crimea region earlier today in what the country's leadership described as an invasion and occupation by Russian forces.

Earlier former Ukrainian president Viktor Yanukovych said he had not ordered police to shoot at protesters, adding that the responsibility for bloodshed in Kiev lay with the demonstrators.

At a news conference in the Russian city of Rostov-on-Don, Mr Yanukovych also said he was surprised that Russian President Vladimir Putin had said nothing in public about the past week's events in Ukraine.

He said he had not seen Mr Putin but had spoken to him by telephone during that time.

Mr Yanukovych said he intends to continue to struggle for the future of Ukraine, saying power was seized by "pro-fascist" forces.

He said the crisis is due to "irresponsible western" policy of "indulging" the protesters on Kiev's Independence Square.

Asked about his rival, former prime minister Yulia Tymoshenko, who was released from jail last Saturday, Mr Yanukovych said he had never meant her any harm.

It also said in a statement that Russian servicemen were blocking off a unit of Ukrainian border guards in the port city of Sevastopol, where part of the Russian Black Sea fleet is based.

Russia's Black Sea fleet had earlier denied any role in the seizure of a military airport near Sevastopol.

Arsen Avakov condemned the events as an armed invasion and occupation.

He said there had been no bloodshed or clashes when armed men, who he described as Russian naval forces, took over a military airport near the port of Sevastopol.

"I consider what has happened to be an armed invasion and occupation in violation of all international agreements and norms," Mr Avakov said on his Facebook page.

He described it as an armed provocation and called for talks.

The armed men did not enter the passenger terminal and appear to be allowing the airport to function normally.

Reuters reported that the men, dressed in full battle gear and carrying assault rifles and machine guns, were moving freely in and out of the control tower.

It quoted one man as saying: "We are here to ensure general order. We don't want radicals coming on planes from Kiev.

"It was our initiative in order to stop the fire from spreading into Crimea. That's why we don't want radicalism to come here. We don't want fascism in Crimea. We want peace here."

The developments come as the European Commission called for a political solution to tension in Crimea and urged all sides to show restraint.

"The situation in Crimea will require a political solution and this can only be achieved via dialogue amongst the different parties involved," a commission spokesman said.

"We want all relevant actors, all parties to be as moderate and restrained as possible ... and to respect the integrity and unity of Ukraine."

Meanwhile, Mr Putin has ordered his government to continue talks with Ukraine on economic and trade relations and to consult foreign partners, including the IMF and the G8, on financial aid.

Mr Putin has also ordered his government to consider a request from Crimea for humanitarian aid.

The US has told Russia to demonstrate in the next few days that it is sincere about a promise not to intervene in Ukraine, saying using force would be a grave mistake.

"We believe that everybody now needs to take a step back and avoid any kind of provocations," said US Secretary of State John Kerry. 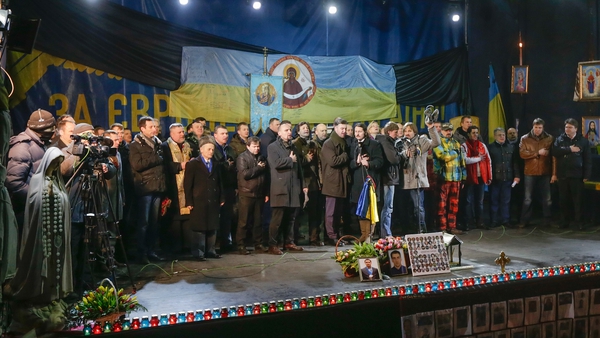