The United States and Britain said tonight that Ukraine should not be a battleground between East and West.

They voiced support for the country after protests that ousted pro-Russia president Viktor Yanukovych.

World powers are seeking to ease tensions over Ukraine as the interim authorities in Kiev grapple with the threat of economic collapse and separatism.

British Foreign Secretary William Hague, after talks with his American counterpart John Kerry, backed Ukraine's territorial integrity, with fears the nation, which has strong links to Russia, could be torn apart.

"This is not a zero-sum game, it is not a West versus East," said Mr Kerry after the two men met at the State Department.

"This is about the people of Ukraine and Ukrainians making their choice about their future."

Mr Hague, who is planning to visit Kiev shortly, was equally emphatic, saying: "This is a country that needs financial assistance from many sources, including from Russia. It's not about pulling them away from Russia.

"It's about enabling them to make their own choices."

Ukraine will have to be "able to meet the conditions for that and it is important for economic reforms to take place," Mr Hague told reporters outside the State Department.

A "pervasive culture of corruption" must also be tackled in order for the international community to feel that it can support Ukraine, he said.

Mr Hague urged Ukraine's interim leaders "to form an inclusive government, involve people from different parts of Ukraine including from the east and the south of Ukraine.

"It's important for Ukrainians to be able to make these decisions together after the terrible divisions of recent months."

"We want to send our strong support for the territorial integrity and unity of Ukraine," he added.

Mr Kerry said that the US also wanted to work with Russia "and with everybody available, to make sure that this is peaceful from this day forward," after almost 100 people died in days of unrest that culminated in the toppling of Mr Yanukovych, a Russian ally.

The US hopes the International Monetary Fund can make an assessment "about exactly what the state of the economy is, a real assessment of what the needs are," said State Department spokeswoman Jen Psaki.

It has accused interim leaders of passing new laws aimed at infringing the humanitarian rights of Russians and other ethnic minorities.

Russian Foreign Minister Sergei Lavrov said Ukraine must not be forced to choose between close ties with Russia or the West.

Ms Ashton said the EU understands the strong links between Ukraine and Russia.

She said she was in Ukraine to offer strong support to the country, help it stay strong and go forward in the way it chooses.

She held talks with a number of political leaders, who had earlier issued an arrest warrant for mass murder against Mr Yanukovych.

"As the EU's resources lie predominantly in the member states, I would also support the idea of a donors' conference for Ukraine in order to allow for member states resources and other European countries to put together a substantial aid package for Ukraine," Mr Rehn said.

Protesters in Crimea have staged rallies against Ukraine's new leaders since Mr Yanukovych was ousted.

A Russian-speaking mayor has been appointed in Sevastopol, where Russia's Black Sea fleet is based.

Acting President Oleksander Turchinov has said anyone who is held responsible for separatist moves should be punished, his press service said in a statement.

This morning, the Ukrainian parliament voted in favour of Mr Yanukovych being tried at the International Criminal Court for serious crimes.

A resolution said Mr Yanukovych and others caused the deaths of more than 100 people and the injury of 2,000.

The parliament said former interior minister Vitaly Zakharchenko and former prosecutor general Viktor Pshonka, who are being sought by the authorities, should also be sent for trial at the ICC.

A spokesman for the ICC, which is based in the Hague, said it had not received a request from Ukraine's government tasking it to investigate events leading up to the ousting of Mr Yanukovych.

"A government can make a declaration accepting the court's jurisdiction for past events," said court spokesman Fadi ElAbdallah, adding that it would then be up to the court's prosecutor to decide whether or not to open an investigation.

"The previous authorities have destroyed the basis of justice and have built not even a mafia, but a gangster system, a system based on corruption and murderers," he told the parliament.

"For this there is only one way - the International Tribunal in the Hague. Right now we need to calm people to begin the rebuilding of the country."

Parliament has delayed forming a new unity government until Thursday with Mr Turchynov saying more time was needed for consultation.

Parliament had been due to form a new government today.

Mr Turchynov also said he will meet law enforcement agencies to discuss what he described as "dangerous signs of separatism" in some regions.

Presidential elections are due to be held on 25 May.

Mr Klitschko has said that he will run for president in the elections. 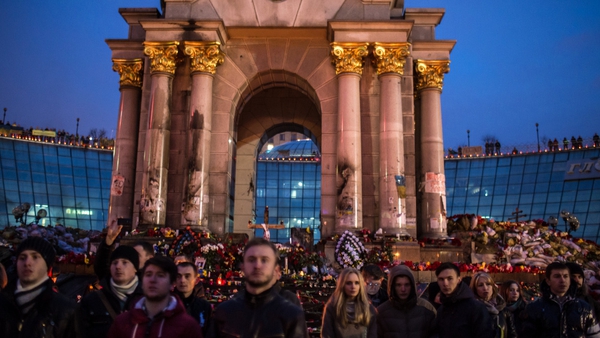