Mr Yanukovych is on the run after being toppled by bloody street protests in which police snipers killed opposition demonstrators.

Russia, Mr Yanukovych's main backer, has cast doubt on the legitimacy of the new Ukrainian authorities.

It said the lives of Russian citizens were under threat there, and contacted NATO to express concern.

The EU has contacted the United States, Japan, China, Canada and Turkey to coordinate aid for Ukraine, a senior European Commission official said.

Freed opposition leader Yulia Tymoshenko, meanwhile, will go for medical treatment in Germany next month, a statement on her website said.

"Former prime minister Yulia Tymoshenko has accepted the offer of treatment from German Chancellor Angela Merkel," the statement said, adding that she would seek treatment after attending the European People's Party congress starting in Dublin on 6 March.

He is still at large after heading first to his power base in the east, where he was prevented from flying out of the country, and then diverting south to Crimea, acting interior minister Arsen Avakov said.

"An official case for the mass murder of peaceful citizens has been opened," Mr Avakov wrote on his Facebook profile.

"Yanukovych and other people responsible for this have been declared wanted."

Mr Yanukovych had left a private residence in Balaclava, in pro-Russian Crimea, for an unknown destination by car with one of his aides and a handful of security guards, Mr Avakov said.

Russia recalled its ambassador from Kiev for consultations yesterday, accusing the opposition of having torn up a transition agreement with the president it supported.

Russian Prime Minister Dmitry Medvedev said Moscow had grave doubts about the legitimacy of those now in power in Ukraine and their recognition by some states was an "aberration".

“We do not understand what is going on there. There is a real threat to our interests and to the lives of our citizens," Mr Medvedev was quoted as saying by Russian news agencies.

Russia cited a duty to protect the lives of its citizens in 2008 as one justification for military intervention in Georgia, another former Soviet republic, in support of Kremlin-backed separatists in South Ossetia.

On Independence Square in central Kiev, the cradle of the uprising, barricades of old furniture and car tyres remained in place.

Diehards still camped out there have vowed to stay until elections in May.

The mood among the few hundred on the square was a mixture of fatigue, sorrow for the more than 80 people killed last week, and a sense of victory after three months of protests.

A large video screen by the side of the stage was showing the faces of the dead, one after another, on a loop.

"Now is not the time for celebrating. We are still at war. We will stay here as long as we have to," said Grigoriy Kuznetsov, 53, dressed in black combat fatigues.

Galina Kravchuk, a middle-aged woman from Kiev, was holding a carnation. "We are looking to Europe now. We have hope. We want to join Europe, " she said.

An ally of former prime minister Ms Tymoshenko, he aims to swear in a government by tomorrow that can run things until a presidential election on 25 May.

Whoever takes charge faces a huge challenge to satisfy popular expectations and will find an economy in deep crisis, with state debt payments of around $6 billion (€4.4bn) due this year.

The finance ministry said it needed $35 billion in foreign assistance over the next two years and appealed for urgent aid in the next one or two weeks.

It called for a donors conference involving representatives of the European Union, the United States and the International Monetary Fund.

French Foreign Minister Laurent Fabius told reporters in Beijing the idea was under discussion and "this should be worked out in the coming days".

The cost of insuring Ukraine's debt fell on hopes that the country would now receive aid and avoid default, while bonds recorded gains on expectations that a new government would focus on the economy. 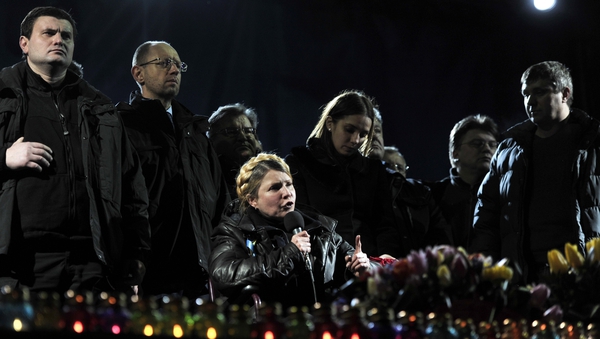