The evacuation of civilians from besieged areas of the Syrian city of Homs resumed this morning after being suspended for a day.

Aid is also being taken into some districts that are under rebel control.

This includes food parcels and wheat provided by the World Food Programme.

More than 1,100 people have left the ruined city since Friday under the protection of the United Nations.

However, 336 men were detained for questioning by the Syrian authorities.

They are being monitored by staff from the UNHCR and UNICEF.

UNHCR spokeswoman Melissa Fleming told RTÉ's Morning Ireland that the men, who are aged between 15 and 55, had been taken to an abandoned school.

She said over 100 have been released and representatives from UNHCR have been able to see that the men are being fairly treated.

"UNHCR has been witness to, not all of the interviews, but some," she said.

"We are also able to speak to each man or boy individually to register that person's profile in our system so that we are able to follow up when they leave.

"Many of them are in desperate need for humanitarian aid so they can shelter themselves and feed themselves during their new life in exile."

Ms Fleming described the health of some of those leaving the city as horrific.

She said: "We expected them to be tired and traumatised, but what we've seen is just horrific. People in such a poor state of health, some of them showing signs of malnourishment.

"Some of them say they have been living on weeds, ground-up coriander, or any bit of spice growing through cracks in concrete they can find.

"They have not seen medicines in months. Children look like they've just woken up from a terrible nightmare."

Meanwhile, a second round of peace talks resumed in Geneva this morning with little sign of the deadlock being broken.

International mediator Lakhdar Brahimi chaired face-to-face talks yesterday, which were described as fruitless by both sides.

There had been hope for yesterday's talks after they began with a minute's silence for the 130,000 people killed since the conflict began.

However, Mr Brahimi told a news conference the second round of talks was as "laborious" as the first round last month.

Elsewhere, Russia has said it would veto a UN resolution on humanitarian aid access in Syria in its current form.

It denounced the draft as an effort to lay a foundation for military strikes against President Bashar al-Assad's government. 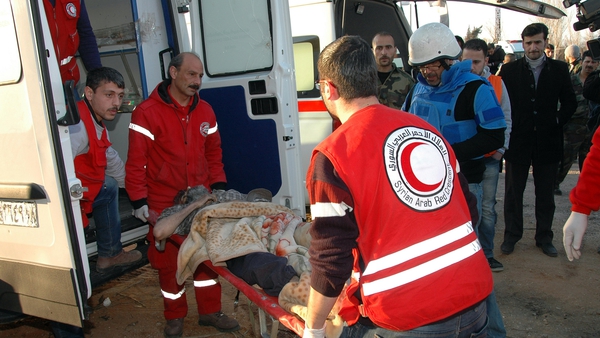