The Syrian Red Crescent has said 300 people were evacuated today from the Old City of Homs.

Humanitarian operations in the besieged rebel-held area continued into a fourth day.

Around 1,000 people have now left the Old City, where rebels fighting to overthrow President Bashar al-Assad have been surrounded for more than a year by his forces.

Meanwhile, a second round of Syria peace talks got off to a shaky start in Geneva today.

The two sides have complained about violations of a local ceasefire and an Islamist offensive respectively in separate meetings with the international mediator.

Ahead of the talks, mediator Lakhdar Brahimi told delegates to commit first to discussing both ending the fighting and setting up a transitional government.

The government side said combating "terrorism" – its catchall term for the revolt - should be agreed first.

During the first round of talks in nearly three years of civil war last month, Mr Brahimi had tried to break down mistrust by focusing on agreeing a truce for a single city, Homs.

The UN World Food Programme underlined how far there was to go.

"The old city of Homs is just one of 40 besieged communities in Syria. Altogether a quarter of a million people have been cut off from humanitarian aid for months," it said.

A letter from Mr Brahimi given to the delegates over the weekend said the new round aimed to tackle the issues of stopping violence, setting up a transitional governing body, and plans for national institutions and reconciliation.

It included a plea: "Will the two sides ... contribute even at a minimum, toward lessening the manifestations of violence, stopping the use of certain weapons and reaching ceasefires in some areas, even for a short period?"

The opposition says a transitional governing body must exclude President Bashar al-Assad. The government says it will not discuss his leaving power.

Mr Brahimi plans to keep meeting the two sides separately for the next few days in the hope of improving the negotiating atmosphere at the talks.

In the letter seen by Reuters, Mr Brahimi increased pressure on the two sides at the weekend to show willingness in the peace process.

In the eight-page document, he said the fighting and transitional governing body were among the most complex and sensitive issues.

Both subjects need treatment over several sessions and long discussions, he said.

During the second week of talks he plans to expand the scope of the discussion to two other issues: how to manage the continuity of Syria's state institutions and how to handle the process of national dialogue and reconciliation that would arise from any eventual agreement in Geneva.

Meanwhile, France has said it will propose a UN Security Council resolution demanding the immediate opening of humanitarian corridors to besieged Syrian cities.

"It is absolutely scandalous that we have been discussing this for some time but the people are still starving," Mr Fabius said.

"That is why, along with other countries, we want to propose a resolution on these lines." 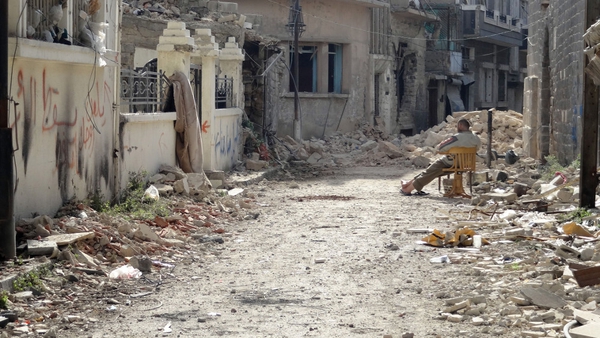